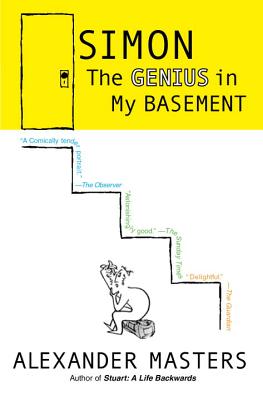 The Genius in My Basement

Alexander Masters tripped over his first book subject on a Cambridge sidewalk, and the result was the multi-award-winning bestseller Stuart: A Life Backwards. His second, he’s found under his floorboards.

One of the greatest mathematical prodigies of the twentieth century, Simon Norton stomps around Alexander’s basement in semidarkness, dodging between stalagmites of bus timetables and engorged plastic bags, eating tinned kippers stirred into packets of Bombay mix. Simon is exploring a theoretical puzzle so complex and critical to our understanding of the universe that it is known as the Monster. It looks like a sudoku table—except a sudoku table has nine columns of numbers.

But that’s not the whole story. What’s inside the decaying sports bag he never lets out of his clutches? Why does he hurtle out of the house in the middle of the night? And—good God!—what is that noxious smell that creeps up the stairwell?

Grumpy, poignant, comical—more intimate than either the author or his quarry intended—Simon: The Genius in My Basement is the story of a friendship and a pursuit.  Part biography, part memoir, and part popular science, it is a study of the frailty of brilliance, the measures of happiness, and Britain’s most uncooperative egghead eccentric.

Alexander Masters studied physics and mathematics in London and Cambridge. For five years he worked in hostels for the homeless and ran a street newspaper. He has also worked as a newspaper columnist, a travel writer, an illustrator, and a bedspread salesman.

Praise For Simon: The Genius in My Basement…

Praise for Simon: The Genius in My Basement

“Exuberant and compelling . . . This is both a happy and a funny book. It is decorated with [Alexander] Masters’s elegant cartoons and his language is lyrical and vernal.”—Financial Times

“An absorbing read, with Masters’s deft pen and idiosyncratic style once again in evidence.”—The Times

“Masters has managed to convey something of the beauty and mystery not just of mathematics but of the human spirit.”—The Sunday Telegraph