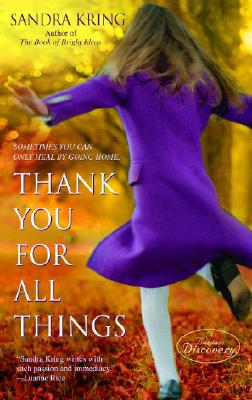 Thank You for All Things

“Eleven-year-old twins Lucy and Milo live with their mother, Tess, who refuses to tell them anything about their father, even his name. In Lucy's search for her father, she learns more about both her mother and the secrets Tess has held since childhood. Kring is an engaging and exceptional storyteller.”
— Margaret Osondu, Osondu Booksellers, Waynesville, NC
View the List

At twelve, Lucy Marie McGowan already knows she’ll be a psychologist when she grows up. And her quirky and conflicted family provides plenty of opportunity for her to practice her calling. Now Lucy, her “profoundly gifted” twin brother, Milo, her commitment-phobic mother, and her New Age grandmother are leaving Chicago for Timber Falls, Wisconsin, to care for her dying grandfather—a complex and difficult man whose failure as a husband and father still painfully echoes down through the years.

Lucy believes her time in the rural town where the McGowan story began will provide a key piece to the puzzle of her family’s broken past, and perhaps even reveal the truth about her own missing father. But what she discovers is so much more—a lesson about the paradoxes of love and the grace of forgiveness that the adults around her will need help in remembering if their family is ever to find peace and embrace the future.

By turns heart-wrenching and heart-mending, Thank You for All Things is a powerful and poignant novel by a brilliant storyteller who illustrates that when it comes to matters of family and love, often it is the innocent who force others to confront their darkest secrets.

Praise For Thank You for All Things: A Novel…

“A touching novel… Kring explores the far-ranging effects of family trauma with a deft hand as her child narrator uncovers the past, bringing light and hope.”—Booklist

“A beautiful, witty story that rings with heartbreak, hope and laughter…. Kring’s brilliance lies in her powerful reversals and revelations, taking readers and characters on a dramatic, emotional roller coaster.”—Publishers Weekly, starred review

“Sandra Kring's delightful and nuanced take on Midwestern America in Thank You for all Things feels real and moving —perhaps because it is so unpretentious.”—Salon.com

Sandra Kring lives in the north woods of Wisconsin. She runs support groups and workshops for adult survivors of trauma. Her debut novel, Carry Me Home, was a Book Sense Notable pick and a 2005 Midwest Booksellers' Choice Award nominee.

How does the title, Thank You for All Things, apply to various characters in the novel? Which characters have the most gratitude? Who seems to have little to be thankful for but manages to feel appreciative nonetheless? How are gratitude and forgiveness linked?

What was the effect of reading the storyline through Lucy’s eyes? How would it have been different if Milo had done the narrating?

Are family secrets always damaging? Did Milo and Lucy benefit from having the truth kept from them? Who else was Tess protecting by remaining silent about her past?

In chapter twelve, Marie says that going home helps her remember who she is. Lucy enjoys hearing this. What does the “homecoming” to Wisconsin teach her about who she is? What do her fantasies of her father, including the theory that Scott Hamilton is her dad, indicate about her perception of herself?

Some of the novel’s most important revelations are reported through journal entries. What did Tess communicate to herself when writing about her life? Why was it difficult for her to be open with her family about her emotional pain?

What kept Tess from feeling completely comfortable with Peter? Why was she hesitant to trust him?

What cycles of abuse occurred in the McGowan family? How did others respond to the damage inflicted by it? What gave Oma/Lillian the strength to return to Wisconsin?

What memories does Tess revive by seeing Mitzi? How does Mitzi’s experience with pregnancy affect her role in Tess’s life? Discuss one of your own lifelong friendships and the ways that friendship has changed over time.

What fueled the rage and shame that made Tess’s father so dangerous? How did dementia transform him? Which aspects of his life and personality endured despite dementia?

Milo and Lucy possess exceptional brain power. Are they equally advanced in matters of the heart? What benefits and problems does their mental prowess bring to their childhood?

How does Tess’s relationship with Clay compare to Milo and Lucy’s? What determines whether siblings will remain close or become estranged?

How did you react to the revelations about Howard? What had you predicted for the truth about Lucy and Milo’s father?

Discuss the homecomings that have made a significant impact on your life.

Sandra Kring grew up in an abusive home and has run support groups and workshops for adult survivors of trauma. What skills and sensitivities does her past bring to her life as a fiction writer, in this book as well as her previous novels, Carry Me Home and The Book of Bright Ideas?