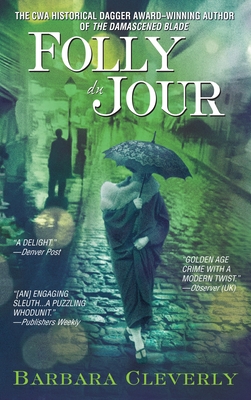 In a box at the famed Théâtre des Champs-Élysées, an ex-soldier and knight of the realm is dead, his throat savagely cut. In a jail cell, diplomat George Jardine, his evening clothes stained with the slain man’s blood, awaits the arrival of his old wartime friend, Joe Sandilands. In spite of the evidence, Sandilands believes Jardine is innocent. His search for a crucial witness—a notorious beauty who quickly vanishes—leads to the discovery of a shocking series of unsolved murders. Is Sandilands hunting a serial killer? Or has he stumbled upon something even more sinister and carefully orchestrated? As the final, chilling pieces of the puzzle fall into place, Sandilands launches his own counterattack against a killer whose sadistic agenda is about to become horrifyingly clear.…

Barbara Cleverly is an award-winning writer of seven novels including the New York Times Notable Book The Last Kashmiri Rose. She lives in Cambridge, England. Delta publishes both Ms. Cleverly's Joe Sandilands novels and her acclaimed Laetitia Talbot series (Bright Hair About the Bone) in the United States.
Loading...
or
Not Currently Available for Direct Purchase