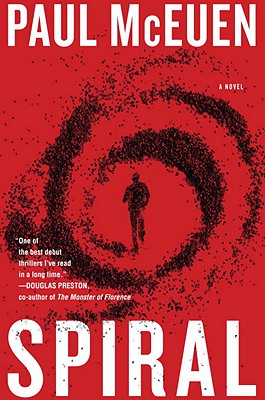 In this riveting debut thriller—a finalist for Best First Novel at the 2012 Thriller Awards and a nominee for a Nero Award—the race is on to stop the devastating proliferation of the ultimate bioweapon. Spiral is perfect for fans of Michael Crichton, Douglas Preston & Lincoln Child, and Richard Preston.

When Nobel laureate Liam Connor is found dead at the bottom of one of Ithaca, New York’s famous gorges, his research collaborator, Cornell professor of nanoscience Jake Sterling, refuses to believe it was suicide. Why would one of the world’s most eminent biologists, a eighty-six-year old man in good health who survived some of the darkest days of the Second World War, have chosen to throw himself off a bridge? And who was the mysterious woman caught on camera at the scene? Soon it becomes clear that a cache of supersophisticated nanorobots—each the size of a spider—has disappeared from the dead man’s laboratory.

Stunned by grief, Jake, Liam’s granddaughter, Maggie, and Maggie’s nine-year-old son, Dylan, try to put the pieces together. They uncover ingeniously coded messages Liam left behind pointing toward a devastating secret he gleaned off the shores of war-ravaged Japan and carried for more than sixty years.

What begins as a quest for answers soon leads to a horrifying series of revelations at the crossroads of biological warfare and nanoscience. At this dangerous intersection, a skilled and sadistic assassin, an infamous Japanese war criminal, and a ruthless U.S. government official are all players in a harrowing game of power, treachery, and intrigue—a game whose winner will hold the world’s fate literally in the palm of his hand.

“Spiral by Paul McEuen carries the reader on a fascinating ride through a world of bioweaponry, nanoscience, murder, and international intrigue. This gripping story, partially based on Unit 731, the biological warfare group of the Imperial Japanese Army in World War II, is one of the best debut thrillers I’ve read in a long time.”—Douglas Preston, author of Impact and The Monster of Florence

“Spiral is an all-too-frighteningly-real tale. This is an exciting debut.”—Steve Berry, author of The Emperor’s Tomb

“A riveting story that combines international intrigue with fascinating inventions such as the MicroCrawler, a  spiderlike robot with knife-sharp legs. In more ways than one, Spiral will get under your skin.” —Mark Alpert, author of Final Theory

“Fast-paced and suspenseful . . . McEuen, a leader in nanoscience research at Cornell, makes unsettling use of recent developments in the field. . . . After you’ve finished the book, try not hearing [the MicroCrawlers] go tink tink tink in the night. . . . exciting and unsettling."—Kirkus Reviews

“It’s hard to reckon with the realization that a prominent scientist in a cutting-edge field, writing his first novel in his “spare time,” has created what may be the most gripping and engrossing thriller this reviewer has ever read in almost 50 years of thriller reading…[Paul McEuen] wisely writes about what he knows…but also shows a true gift for plotting, pace, characterization, and writerly clarity…and remarkably, he makes [his] ideas accessible to typical thriller aficionados.  A stunning achievement.”
– Booklist, starred review

Paul McEuen is the Goldwin Smith Professor of physics at Cornell University. He has received numerous awards for his research, including the Agilent Technologies Europhysics Prize, a Packard Fellowship, and a Presidential Young Investigator Award. He lives with his wife and five dogs in Ithaca, New York.
Loading...
or
Not Currently Available for Direct Purchase