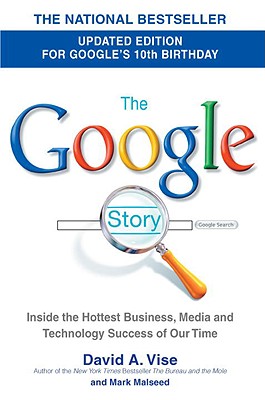 By David A. Vise, Mark Malseed

Here is the story behind one of the most remarkable Internet successes of our time. Based on scrupulous research and extraordinary access to Google, the book takes you inside the creation and growth of a company whose name is a favorite brand and a standard verb recognized around the world. Its stock is worth more than Disney's, McDonald's and General Motors' combined, its staff enjoys free meals inspired by a former chef for the Grateful Dead, and its employees traverse the firm's colorful Silicon Valley campus on scooters and inline skates.

The Google Story is the definitive account of the populist media company powered by the world's most advanced technology that in a few short years has revolutionized access to information about everything for everybody everywhere.

In 1998, Moscow-born Sergey Brin and Midwest-born Larry Page dropped out of graduate school at Stanford University to, in their own words, "change the world" through a search engine that would organize every bit of information on the web for free.

While the company has done exactly that in more than one hundred languages, Google's quest continues as it seeks to add millions of books, videos, personal genetic records and more to its searchable database.

Readers will learn about the amazing business acumen and computer wizardry that started the company on its astonishing course; the secret network of computers delivering lightning-fast search results; the unorthodox approach that has enabled it to shake up Wall Street, scoop up YouTube, and challenge Microsoft's dominance at every turn. Not afraid of controversy, Google is looking to expand in Communist China and pursuing other projects that may come to test the founders' mantra: DON'T BE EVIL.

Praise For The Google Story: For Google's 10th Birthday…