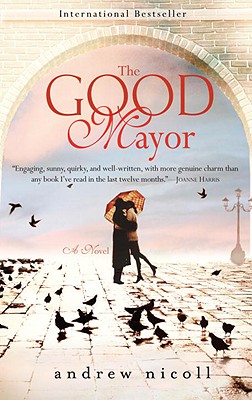 In a busy little city in a forgotten corner of the Baltic, in an office on the square, the beloved mayor of Dot lies on his office floor, peering beneath his door. Tibo Krovic has come to work from his house down at the end of a blue-tiled path. He’s taken, as usual, the tram seven stops, and walked the final two. He’s stopped for strong Viennese coffee. And now Tibo Krovic is looking at the perfectly beautiful feet of his voluptuous, unhappily married secretary, Mrs. Agathe Stopak. The Good Mayor is badly in love.

And over the course of days, months, and years, amid life’s daily routine—a fallen lunch pail, a single touch . . . a handwritten note and then a terrible choice—he and Agathe must come to terms with this thing that has seized hold of them both, exploring the tastes of desire and despair, love, friendship, and betrayal. . . . Until fate, magic, and their own actions lift them from their moorings—toward an utterly unexpected future.

Praise For The Good Mayor: A Novel…

“One of the best books I have ever read—it had humour and lightness of touch that hooked me from the first page to the last.”—Daily Telegraph

After a brief stint as a lumberjack, Andrew Nicoll has spent his working life as a journalist. He is married with three children.
Loading...
or
Not Currently Available for Direct Purchase