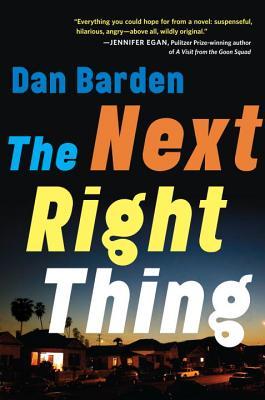 The Next Right Thing

Southern California home builder extraordinaire Randy Chalmers has to admit he’d be dead or in prison were it not for his best friend, lawyer, and Alcoholics Anonymous sponsor, Terry Elias. A former police officer, Randy narrowly escaped being an evening news highlight during years ravaged by anger and alcohol. Thanks to Terry’s coaching and an endless stream of caffeine-fueled AA meetings, Randy’s been off the booze for eight years, has a successful new career, and is thriving in a healthy relationship with his vegan yoga-instructor girlfriend. All is well . . . until Terry, himself supposedly sober for fifteen years, is found dead of a heroin overdose.

How could Terry, who had dragged so many others from the edge, jump off himself? Convinced that something (or someone) must have pushed him, Randy is soon off on a dry-drunk quest for answers—and possibly revenge. He discovers a trail of dirty secrets that lead to missing persons, shady real estate deals, hydroponic pot farms, and Internet pornography. When his suspicions ultimately connect Terry’s death to the activities of a recently appointed Superior Court judge—who just happens to be dating Randy’s ex-wife—Randy has to ask himself: Is he really onto something or just suffering from grief and paranoia? Will his increasingly frenzied behavior ruin his current relationship and his chances of regaining custody of his daughter? Will he destroy the life that he has worked so hard to achieve? Will he reach for a drink?

The Next Right Thing is a hilarious and harrowing combination of thriller and recovery tale, equal parts hard-earned wisdom and old-fashioned suspense.

Praise For The Next Right Thing…

Advance praise for The Next Right Thing

“Everything you could hope for from a novel: The Next Right Thing is suspenseful, hilarious, angry—above all, wildly original. I only wish I’d written it myself.”—Jennifer Egan, Pulitzer Prize–winning author of A Visit from the Goon Squad

“Dan Barden’s The Next Right Thing is The Long Goodbye in rehab. It’s fierce and funny and absolutely worthy of its predecessors—like them, Barden’s hard-boiled tale is really an inquiry into male love and grief, and the state of the American heart.”—Jonathan Lethem

“The Next Right Thing has humanity, humor, and insight to burn. Dan Barden takes the clay of the California hard-boiled novel and shapes it into something new.”—George Pelecanos

"An extremely engaging novel…Dan Barden shows us how it's always the people who know us best – the ones whose love (and hatred) is therefore the purest – who have the power to save us.” – Scott Smith, author of A Simple Plan and The Ruins

“Randy Chalmers is an American literary hero for our time: a recovering drunk with a big, broken heart and an anger problem. I adore him. In The Next Right Thing, Dan Barden captures exactly the pitiless, irreverent love that keeps drunks sober.” - Michelle Huneven, National Book Critics Circle Finalist author of Round Rock and Blame

"Dan Barden's one hell of a writer." – Andrew Vachss

“Barden vividly renders the culture of Alcoholics Anonymous and the flawed souls who depend on it to stay sane and alive.”--Booklist

“[R]ings true…As I put the book down, I wondered whether Barden had a friend whose death inspired those [final] haunting paragraphs. It feels that real.”—The Washington Post

“Dan Barden's new novel, The Next Right Thing, is a rare beast: a detective story where the central mystery turns out not to be the most important thing going on. Incidentally, and perhaps even rarer, it's also a detective story that makes you wonder if you ought to take up construction and interior design.”—The Atlantic

“[M]ost unexpected… a refreshingly sordid look at sobriety—perhaps because the action is more engaging than the sinless serenity that drives most tales about life after active addiction. As Barden’s damaged characters curse and fight their way through the hills of tony Laguna Beach and the grittier streets of urban Santa Ana, they defy any expectations that sobriety translates into saintliness. … [A] hell of a lot more provocative than the average hardboiled crime novel”—TheFix.com

"... reasonably serious study of male companionship, what it takes to fly straight and the ultimate inscrutability of other people." --The New York Times

"Barden uses the conventions of noir perfectly, giving the audience the specific pleasures it was seeking while illuminating truths about recovery." --The Weekly Standard

Dan Barden is also the author of "John Wayne: A Novel." A native of Southern California, he teaches at Butler University and lives in Indianapolis with his wife, Elizabeth Houghton Barden, owner of Big Hat Books & Arts.
or
Not Currently Available for Direct Purchase