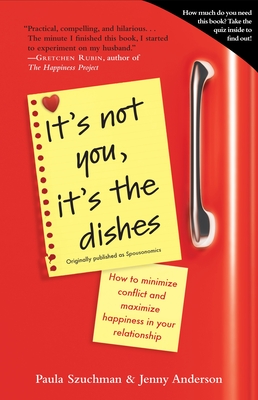 It's Not You, It's the Dishes (originally published as Spousonomics) (Paperback)

How to Minimize Conflict and Maximize Happiness in Your Relationship

Your marriage is fine, right? Sure, there are showdowns over who unloads more dishes, and some simmering discontent over who drives more car pools, cleans more dust bunnies, and keeps the social wheels of your existence greased. The sex is good, though you can’t remember when you last had it. Come to think of it, you’re plagued by a nagging sense that marriage used to be so much more fun. Marriage can be a mysterious, often irrational business. But the key, propose Paula Szuchman and Jenny Anderson in this incomparable and engaging book, is to think like an economist. We all have limited time, money, and energy, but we must allocate these resources efficiently. It’s Not You, It’s the Dishes is a clear-eyed, rational route to demystifying your disagreements and improving your relationship. Smart, funny, deeply researched, and refreshingly realistic, It’s Not You, It’s the Dishes cuts through the noise of emotions, egos, and tired relationship clichés to solve the age-old riddle of a happy, healthy marriage.

Paula Szuchman is a page-one editor at The Wall Street Journal, where she was previously a reporter covering the travel industry, college internships, and roller coasters. She lives with her husband and daughter in Brooklyn, N.Y.

Jenny Anderson is a New York Times reporter who spent years covering Wall Street and won a Gerald Loeb Award for her coverage of Merrill Lynch. She currently writes on education and lives with her husband and daughter in Manhattan.

Praise For It's Not You, It's the Dishes (originally published as Spousonomics): How to Minimize Conflict and Maximize Happiness in Your Relationship…

“One of the most delightful, clever, and helpful books about marriage I’ve ever seen.”—Elizabeth Gilbert, author of Eat, Pray, Love

“Practical, compelling, and hilarious . . . The minute I finished this book, I started to experiment on my husband.”—Gretchen Rubin, author of The Happiness Project

“This clever and hilarious book is really a user’s manual for improving relationships in marriage, family, business, and society in general.”—The Miami Herald

“The book is grounded in solid research, makes economics entertaining, and might just save a marriage or two.”—James Pressley, Bloomberg

“A convincing and creative case for how the dismal science can help reconcile marital disputes.”—The Washington Post
or support indie stores by buying on
Copyright © 2020 American Booksellers Association