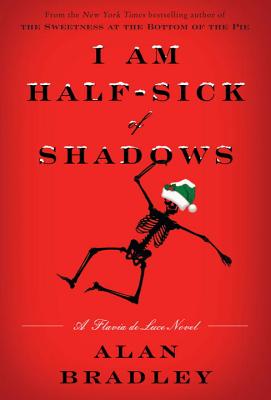 I Am Half-Sick of Shadows

“The latest adventure featuring 11-year old chemist/sleuth Flavia de Luce is a Christmas gift in itself. Flavia's home is brimming with people as there is a film crew renting the manor to make a new movie and a Christmas Eve blizzard has stranded half of the citizens of Bishop's Lacey there as well. When a murder takes place, Flavia has to divide her time between 'helping' the police solve the crime and finishing the trap she is making to catch Father Christmas. The result is delightful!”
— Linda Walonen, Bay Books, San Ramon, CA
View the List

It's Christmastime, and the precocious Flavia de Luce--an eleven-year-old sleuth with a passion for chemistry and a penchant for crime-solving--is tucked away in her laboratory, whipping up a concoction to ensnare Saint Nick. But she is soon distracted when a film crew arrives at Buckshaw, the de Luces' decaying English estate, to shoot a movie starring the famed Phyllis Wyvern. Amid a raging blizzard, the entire village of Bishop's Lacey gathers at Buckshaw to watch Wyvern perform, yet nobody is prepared for the evening's shocking conclusion: a body found, past midnight, strangled to death with a length of film. But who among the assembled guests would stage such a chilling scene? As the storm worsens and the list of suspects grows, Flavia must use every ounce of sly wit at her disposal to ferret out a killer hidden in plain sight.

Praise For I Am Half-Sick of Shadows…

“If ever there was a sleuth who’s bold, brilliant, and yes, adorable, it’s Flavia de Luce.”—USA Today

“Delightful . . . [Flavia is] a combination of Eloise and Sherlock Holmes. . . . Fearless, cheeky, wildly precocious.”—The Boston Globe, on The Sweetness at the Bottom of the Pie

“Utterly beguiling . . . wicked wit . . . The real delight here is [Flavia’s] droll voice and the eccentric cast.”—People (four stars), on The Weed That Strings the Hangman’s Bag

“Outstanding . . . [a] marvelous blend of whimsy and mystery.”—Publishers Weekly (starred review), on A Red Herring Without Mustard

Alan Bradley is the internationally bestselling author of many short stories, children's stories, newspaper columns, and the memoir The Shoebox Bible. His first Flavia de Luce novel, The Sweetness at the Bottom of the Pie, received the Crime Writers' Association Debut Dagger Award, the Dilys Winn Award, the Arthur Ellis Award, the Agatha Award, the Macavity Award, and the Barry Award, and was nominated for the Anthony Award. His other Flavia de Luce novels are The Weed That Strings the Hangman's Bag, A Red Herring Without Mustard, I Am Half-Sick of Shadows, Speaking from Among the Bones, The Dead in Their Vaulted Arches, andAs Chimney Sweepers Come to Dust.