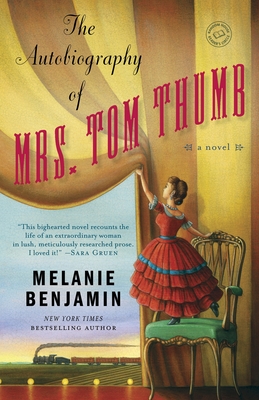 The Autobiography of Mrs. Tom Thumb

“In this marvelous fictionalized 'autobiography' of Mercy Lavinia Warren Bump, known by many names during her miniature life but most famously as Mrs. Tom Thumb, Vinnie becomes a heroine to America and the world during the Gilded Age. A leading celebrity as part of Phineas Barnum's human curiosities in his American Museum in New York City, Vinnie uses her intelligence and ambition to bring love and admiration to the 'small' world within the 'tall' world surrounding her. Benjamin offers a poignant story that will insert itself into every reader's heart.”
— Carol Hicks, Bookshelf At Hooligan Rocks, Truckee, CA
View the List

For anyone who loves the historical novels of Sara Gruen, Geraldine Brooks, and E. L. Doctorow, a barnstorming tale of an irrepressible, brawling, bawdy era and the remarkable woman who had the courage to match the unique spirit of America’s Gilded Age.

She was only two feet, eight inches tall, but more than a century later, her legend reaches out to us. As a child, Mercy Lavinia “Vinnie” Warren Bump was encouraged to live a life hidden away from the public. Instead, she reached out to the immortal impresario P. T. Barnum, married the tiny superstar General Tom Thumb in the wedding of the century, and became the world’s most unexpected celebrity. Vinnie’s wedding captivated the nation, preempted coverage of the Civil War, and even ushered her into the White House. But her fame also endangered the person she prized most: her similarly sized sister, Minnie, a gentle soul unable to escape the glare of Vinnie’s spotlight. A barnstorming novel of the Gilded Age, The Autobiography of Mrs. Tom Thumb is the irresistible epic of a heroine who conquered the country with a heart as big as her dreams—and whose story will surely win over yours.

Praise For The Autobiography of Mrs. Tom Thumb: A Novel…

“By turns heartrending and thrilling, this bighearted novel recounts the life of an extraordinary woman in lush, meticulously researched prose. I loved it!”—Sara Gruen

“[Melanie Benjamin] knows how to combine research and readability. And she’s given Vinnie such dignity and courage . . . that her heroine commands attention from the first page.”—The Washington Post

“Remarkable, soaring . . . a spellbinding tale . . . a fascinating story of triumph and tragedy and one person who refused to live a small life.”—BookPage

“Melanie Benjamin enfolds the reader in the intimate world of Lavinia Warren Stratton, better known as Mrs. Tom Thumb, [whose] voice is unflinching. . . . That the characters have faults and regrets, as well as hope, adds to the veracity of the novel.”—The Denver Post

“A narrative voice that is feisty, intelligent, brave, adventurous, and resourceful.”—The Boston Globe

“Grabs you from the opening pages, providing hints of the absorbing and entertaining story to come . . . a delightful cavalcade of late nineteenth-century Americana.”—Library Journal

Melanie Benjamin is the New York Times bestselling author of The Children’s Blizzard, Mistress of the Ritz, The Girls in the Picture, The Swans of Fifth Avenue, The Aviator's Wife, The Autobiography of Mrs. Tom Thumb, and Alice I Have Been. Benjamin lives in Chicago, Illinois, where she is at work on her next historical novel.
Loading...
or
Not Currently Available for Direct Purchase