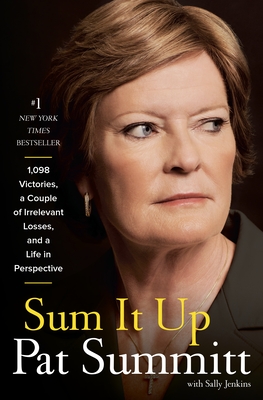 A Thousand and Ninety-Eight Victories, a Couple of Irrelevant Losses, and a Life in Perspective

Pat Summitt was only 21 when she became head coach of the Tennessee Vols women's basketball team. For 38 years, she broke records, winning more games than any NCAA team in basketball history. She coached an undefeated season, co-captained the first women's Olympic team, was inducted into the Basketball Hall of Fame, and was named Sports Illustrated 'Sportswoman of the Year'.
She owed her coaching success to her personal struggles and triumphs. She learned to be tough from her strict, demanding father. Motherhood taught her to balance that rigidity with communication and kindness. She was a role model for the many women she coached; 74 of her players have become coaches.
Pat's life took a shocking turn in 2011, when she was diagnosed with early-onset Alzheimer's disease, an irreversible brain condition that affects 5 million Americans. Despite her devastating diagnosis, she led the Vols to win their sixteenth SEC championship in March 2012. Pat continued to be a fighter, facing this new challenge the way she's faced every other--with hard work, perseverance, and a sense of humor.

Praise For Sum It Up: A Thousand and Ninety-Eight Victories, a Couple of Irrelevant Losses, and a Life in Perspective…


"Basketball legend Pat Summitt recalls her life in vivid detail, describing its triumphs, both on and off the court.... With her trademark honesty and grace, Summitt reveals her fears, her early anger and astonishment, her diminishing abilities, her decision to retire, and how her faith sustains her."—USA Today

"Pat Summit was one of the best coaches ever, and one of the most enduring...She helped lift her sport out of an era in which high school girls didn't even play on a full court, saw the number of female college athletes rise from 16,000 to almost 20,000, won eight national titles, and gradduated 100 percent of the players who completed their eligibility. She did this through force of personality and, in her own telling, with a mix of love, fury and manipulation...As scandals and player lawsuits make college sports seem increasingly ruthless and suspect, Summitt is often held up as a rare example of dignity and class."
-Emily Bazelon, NY Times

PAT SUMMITT became head coach of the Tennessee Lady Volunteers in 1974; since then she achieved an astounding .843 average and won 8 national championships. She was the first coach in NCAA history to reach 1,000 wins. She lived in Tennessee with her son, Tyler. SALLY JENKINS is the author of #1 New York Times bestseller It's Not About the Bike. Her other 8 books include The Real All-Americans: The Team That Changed a Game, a People, a Nation, and The State of Jones. Her work has been featured in Vanity Fair, GQ, and Sports Illustrated. A native of Texas, Jenkins graduated from Stanford and lives in New York City.
Loading...
or
Not Currently Available for Direct Purchase