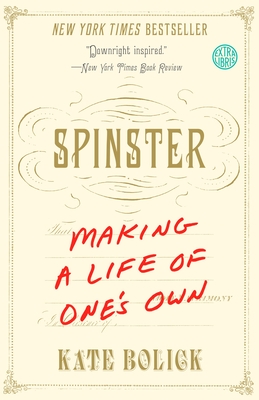 Making a Life of One's Own

“Whom to marry, and when will it happen—these two questions define every woman’s existence.”

So begins Spinster, a revelatory and slyly erudite look at the pleasures and possibilities of remaining single. Using her own experiences as a starting point, journalist and cultural critic Kate Bolick invites us into her carefully considered, passionately lived life, weaving together the past and present to examine why­ she—along with over 100 million American women, whose ranks keep growing—remains unmarried.

This unprecedented demographic shift, Bolick explains, is the logical outcome of hundreds of years of change that has neither been fully understood, nor appreciated. Spinster introduces a cast of pioneering women from the last century whose genius, tenacity, and flair for drama have emboldened Bolick to fashion her life on her own terms: columnist Neith Boyce, essayist Maeve Brennan, social visionary Charlotte Perkins Gilman, poet Edna St. Vincent Millay, and novelist Edith Wharton. By animating their unconventional ideas and choices, Bolick shows us that contemporary debates about settling down, and having it all, are timeless—the crucible upon which all thoughtful women have tried for centuries to forge a good life.

Intellectually substantial and deeply personal, Spinster is both an unreservedly inquisitive memoir and a broader cultural exploration that asks us to acknowledge the opportunities within ourselves to live authentically. Bolick offers us a way back into our own lives—a chance to see those splendid years when we were young and unencumbered, or middle-aged and finally left to our own devices, for what they really are: unbounded and our own to savor.


Praise For Spinster: Making a Life of One's Own…

*One of Newsday's Books Not to Miss*

*One of Vogue.com’s Recommended Spring Books for 2015*

“What’s surprising about Spinster is how, in its charmingly digressive style, the book sets forth a clear vision not just for single women, but for all women: to disregard the reigning views of how women should live, to know their own hearts and to carve out a little space for their dreams.” —New York Times Book Review

“Awakened and inspired by the lives of five historical women, Bolick revels in her own singledom in this blazingly smart memoir, which argues that “spinster” should be a coveted destination, not a dirty word. Her eloquent, provocative story illustrates how charting a unique course can make any life truly singular.” —People

“Bolick’s rich chronicle makes Spinster one of the most important works of feminist cultural history of the last 20 years...Let this remarkable memoir stand as an important political reckoning for women's trajectories, and a moving personal effort toward that greater vision.” —National Post

“Bolick’s evocation of the untethered state is often beautiful, her metaphors precise and lyrical in the manner of her heroines. More important, she does not flinch from describing just how alone alone can feel...Bolick is adept at spotting the unexamined confusions and curious silences that have arisen in the wake of an incomplete sexual revolution—and that bedevil those of us who are living outside of our culture’s sturdiest institutions.” —Elle

“A pleasing, intelligent book. Bolick’s minibiographies of her five awakeners are captivating, and she is great company on the page–perhaps she will prove to be an awakener for a new generation.”—TIME

“Often lyrical...a personal story of the pleasures and challenges of being a woman at a time of changing rules and seemingly endless possibilities.” —The Economist

“Bolick’s intimate exploration of spinsterhood celebrates the courage of defining for oneself what it means to be happy.” —Newsday

“In Spinster, a sharp-witted paean to the single life, Kate Bolick explains why she has consciously opted out of coupling.”  —Harper's Bazaar

“Provocative...A uniquely American quest for a life without regrets - and without a partner.” —Associated Press

“Stemming from Bolick’s fantastic Atlantic cover story, “All the Single Ladies,” Spinster expands on that initial work, in a beautiful piece of cultural history that should prove inspiring and thought-provoking for women of all ages. Bolick takes us deep into her own story as a single woman, and explores the lives of her “awakeners” — women like Maeve Brennan and Edna St. Vincent Millay, who served as models and warnings of the rich life that could be made, free from the constraints of a traditional marriage.” —Flavorwire

“Something to celebrate…[Spinster offers] models for women’s lives distinct from the demands of the domestic realm.” —The Week

“In this beautifully articulated memoir-cultural/historical examination mashup, Bolick shares both her own reasons for remaining unmarried, as well as sharing examples of great spinsters throughout history (such as Edna St. Vincent Millay and Charlotte Perkins Gilman), absolving the term’s negative connotations in the process…Bolick’s newest is an inspirational treatise that will help define a nascent generation of women who choose to live happily independently.” —Bustle

“While the stereotypes of spinsters are mostly unflattering—cue the cat lady, the bag lady and Grey Gardens—Bolick’s Spinster offers a corrective through nuanced portraits of women who love and are loved, and who choose to place their work and their friends at the center of their lives. Engaging and informative, Spinster offers a decidedly non-“Sex and the City” portrait of the challenges and opportunities of single life.” —Bookpage

“Kate Bolick brings a bracing feminist consciousness to bear on the lives of five unconventional women of the past and on her own young life in the twenty-first century. She writes about the dilemmas of love and work—then and now—with rare perspicacity and poignancy.” —Janet Malcolm, author of The Journalist and the Murderer

“Spinster is a triumph, a provocative and moving exploration of what it means for a woman to chart her own course.” —Malcolm Gladwell, author of David and Goliath

“Kate Bolick’s Spinster will take your breath away. Writing with a bold vision and in incandescent prose, Bolick gives us a user’s guide to going solo — and a gorgeous work of cultural criticism.” —Susan Cain, co-founder of Quiet Revolution and bestselling author of Quiet

“In Spinster, her wise and subtle memoir, Kate Bolick explores that freighted term—and the often-maligned woman to whom it is attached—and deftly, persuasively reclaims it. In telling the stories of her literary ‘awakeners’—five vividly-conjured women who escaped the conventional ties of marriage and family—and in elegantly weaving cultural history into her own personal progress to maturity, Bolick shows by argument and example that the single life is not a predicament to be escaped, but a distinctive, demanding, rewarding form of freedom. I wish I could give this book to my thirty-year-old self; she would have taken heart and inspiration from Bolick’s bold and intelligent self-examination—not necessarily to follow her path, but to be tenderly reminded of this simple but easily neglected truth: that there is another way to want to be.” —Rebecca Mead, author of My Life in Middlemarch

“What happens when you don't get married? Setting out to answer this question, Kate Bolick has written a moving, insightful, and important inquiry into how women's lives are narrated—not just in poems, novels, biographies, and memoirs, but also in our own heads, every day, as we make the constant stream of decisions that constitute a human life. Ambitious in the best way, Spinster made me think differently about everything from novelistic plot to the meaning of furniture.”—Elif Batuman, author of The Possessed

“Kate Bolick has written a heart-stirringly wonderful book—a diary, a history lesson, and a meditation on what it really means to be an independent woman at this moment in America. A fiercely smart young writer, so very much of her time that any urban single woman of "marriagable" age will instantly relate to her (and those of us who used to be that woman will, as well) —decides to attack the idea that marriage must be a female goal. She takes us on her journey from her New England girlhood through an advancing literary and media career, with and without boyfriends, in Boston and then, most heart-stirringly, in New York. She intersperses each vulnerably lived but precisely analyzed step with the inspiration she has searched out, with touching passion, from magnificently singular role models from the late 19th and early 20th century. She calls these heroines her ‘awakeners,’  But by the end of  Spinster it is we who have been awakened by Bolick’s insistence on an examined life—a glowingly examined life—and the reminder that this ruminative self-honesty, this peace-making with oneself, is not only what we must nourish but also what can save us.” —Sheila Weller, author of The News Sorority and Girls Like Us

“Women of the world, listen here: Drop whatever you’re doing and read Kate Bolick’s marvelous meditation on what it means to be female at the dawn of the 21st century.  Part self-investigation, part social history, this utterly singular book reminded me, in its warmth and wit, of Elizabeth Gilbert’s Eat Pray Love and Rebecca Mead’s My Life in Middlemarch, but ultimately Bolick’s restless, razor-like intelligence calls to mind none other than Betty Friedan. And like The Feminine Mystique, Spinster will make you re-think your entire life, if not radically change it.” —Joanna Rakoff, author of My Salinger Year and A Fortunate Age

“Today, women throughout the world have embarked on an unprecedented experiment in solo living, and no one has chronicled the experience with the candor, insight, and intelligence of Kate Bolick. Spinster is part memoir, part social history, part adventure story, all riveting. No matter whether we're married or single, it invites us to think seriously about how we want to live.” —Eric Klinenberg, author of Going Solo

“[A] powerful memoir…Bolick’s intense and moving combination of personal, historical, and cultural narratives will inspire readers—especially women—to think about what they want their own lives to be, and how close they are to their goals.” —Publishers Weekly [starred]

“Refreshingly bold and incisive… As Bolick traces her evolution into a woman unapologetic for her choices and unafraid of her own personal freedom, she also reclaims the derogatory word ‘spinster’ for all females, married or not… A sexy, eloquent, well-written study/memoir.” –Kirkus Reviews [starred]

“Smartly written, intimate, and heartfelt, Spinster challenges readers to reconsider what a successful life feels like for women and gifts them with a wondrous group of historic figures to immerse themselves in. A brilliant and timely narrative for twenty-first-century bluestockings, and book groups shall rejoice from all the wonders it has to offer.” –Booklist

“Author Kate Bolick of The Atlantic writes an assured and engaging volume on the subject of spinsterhood, and in doing so reclaims the word and makes it entirely her own. Whether you’re a woman, or you simply know some, this is an enlightening read about breaking free of conventional wisdom of love and marriage. Bolick is a feminist hero in the making.”–Bookish

“Bolick's message for readers is a celebration of the delights, challenges and opportunities of remaining single.” –Shelf Awareness

Kate Bolick is a contributing editor to The Atlantic. She was previously the executive editor of Domino magazine. She lives in New York.
Loading...
or support indie stores by buying on
(This book is on backorder)