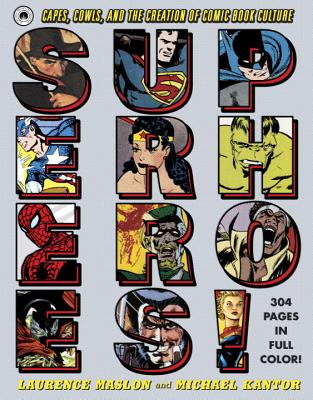 Capes, Cowls, and the Creation of Comic Book Culture

Superman, Batman, Spider-Man, Iron Man, Wonder Woman, the Avengers, the X-Men, Watchmen, and more: the companion volume to the PBS documentary series of the same name that tells the story of the superhero in American popular culture.

Together again for the first time, here come the greatest comic book superheroes ever assembled between two covers:  down from the heavens—Superman and the Mighty Thor—or swinging over rooftops—the Batman and Spider-Man; star-spangled, like Captain America and Wonder Woman, or clad in darkness, like the Shadow and Spawn; facing down super-villains on their own, like the Flash and the Punisher or gathered together in a team of champions, like the Avengers and the X-Men!

Based on the three-part PBS documentary series Superheroes, this companion volume chronicles the never-ending battle of the comic book industry, its greatest creators, and its greatest creations.  Covering the effect of superheroes on American culture—in print, on film and television, and in digital media—and the effect of American culture on its superheroes, Superheroes: Capes, Cowls, and the Creation of Comic Book Culture appeals to readers of all ages, from the casual observer of the phenomenon to the most exacting fan of the genre.

Drawing from more than 50 new interviews conducted expressly for Superheroes!—creators from Stan Lee to Grant Morrison, commentators from Michael Chabon to Jules Feiffer, actors from Adam West to Lynda Carter, and filmmakers such as Zach Snyder—this is an up-to-the-minute narrative history of the superhero, from the comic strip adventurers of the Great Depression, up to the blockbuster CGI movie superstars of the 21st Century.  Featuring more than 500 full-color comic book panels, covers, sketches, photographs of both essential and rare artwork, Superheroes is the definitive story of this powerful presence in pop culture.

Praise For Superheroes!: Capes, Cowls, and the Creation of Comic Book Culture…

“From its roots in the pulp novels of the early 1900s to its contemporary ubiquity, Superheroes! provides intriguing fodder for those of us who wonder how this age of adolescence dawned, and why it’s stuck around so long. . . . colorfully and copiously illustrated . . . the companion volume to the three-part PBS documentary series Superheroes:  A Never-Ending Battle. If the television series represents an express ride through 75 years of comics history, its more comprehensive coffee-table iteration is ideally suited to those of us nerds who’d prefer to take the local."--The New York Times Book Review

"A breezy, imaged-filled narrative perfect for someone who wants a single volume history of comic superheroes. . . . I enjoyed it. If you have someone who still can’t believe you read superhero comics, this is a nice volume to explain the power and history of the genre."--dcwomenkickingass.tumblr.com

Laurence Maslon is an associate arts professor and associate chair at NYU's Graduate Acting Program. He has written the companion volumes to Michael Kantor's documentary series, "Make 'Em Laugh" and "Broadway: The American Musical," in addition to writing several other books about the theater and editing three volumes for the Library of America. He is the host of "Broadway to Main Street," a weekly radio show and lives in New York and Long Island with his wife and son.

Over the past twenty-five years of work in public television, Michael Kantor has established himself as one of the nation's leading independent documentary filmmakers. As a writer, director, and producer, his works include "Quincy Jones: In the Pocket," "Broadway: The American Musical," and "Make 'Em Laugh: The Funny Business of America." He lives in a fortress of solitude 28 minutes north of New York City, inhabited by his family of superheroes.
Loading...
or
Not Currently Available for Direct Purchase