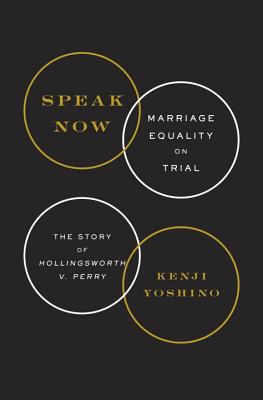 Marriage Equality on Trial: The Story of Hollingsworth V. Perry

A renowned legal scholar tells the definitive story of Hollingsworth v. Perry, the trial that stands as the most potent argument for marriage equality Speak Now tells the story of a watershed trial that unfolded over twelve tense days in California in 2010. A trial that legalized same-sex marriage in our most populous state. A trial that interrogated the nature of marriage, the political status of gays and lesbians, the ideal circumstances for raising children, and the ability of direct democracy to protect fundamental rights. A trial that stands as the most potent argument for marriage equality this nation has ever seen. In telling the story of Hollingsworth v. Perry, the groundbreaking federal lawsuit against Proposition 8, Kenji Yoshino has also written a paean to the vanishing civil trial--an oasis of rationality in what is often a decidedly uncivil debate. Above all, this book is a work of deep humanity, in which Yoshino brings abstract legal arguments to life by sharing his own story of finding love, marrying, and having children as a gay man. Intellectually rigorous and profoundly compassionate, Speak Now is the definitive account of a landmark civil-rights trial. -- Winner, Stonewall Book Award.

Kenji Yoshino is the Chief Justice Earl Warren Professor of Constitutional Law at New York University School of Law. A graduate of Yale Law School, where he taught from 1998 to 2008, he is the author of Covering: The Hidden Assault on Our Civil Rights and A Thousand Times More Fair: What Shakespeare's Plays Teach Us About Justice. Yoshino's writing has appeared in the Los Angeles Times, the New York Times, and the Washington Post. He lives in New York with his husband and two children.
Loading...
or
Not Currently Available for Direct Purchase