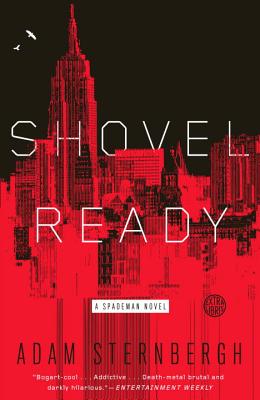 The futuristic hardboiled noir that Lauren Beukes calls “sharp as a paper-cut” about a garbage man turned kill-for-hire.

Spademan used to be a garbage man.  That was before the dirty bomb hit Times Square, before his wife was killed, and before the city became a blown-out shell of its former self.

In a near-future New York City split between those who are wealthy enough to “tap in” to a sophisticated virtual reality, and those who are left to fend for themselves in the ravaged streets, Spademan chose the streets.  When his latest client hires him to kill the daughter of a powerful evangelist, he must navigate between these two worlds—the wasteland reality and the slick fantasy—to finish his job, clear his conscience, and make sure he’s not the one who winds up in the ground.

“[Sternbergh] skillfully blends elements of noir, sci-fi, and speculative fiction, and keeps the action and the dialogue energetic.” —The New Yorker

“A fast-paced thriller. . . . Darkly humorous, darkly cynical and darkly violent. Yeah, pretty dark. But the spare prose and no-nonsense voice of the troubled hitman narrator is so riveting and sympathetic that it is really difficult to put this book down.” —Kareem Abdul-Jabbar, The Orange County Register

“Boy, does this plot drive. It’s one of those books so gripping you read the whole thing in a single go. . . . Swift, [with] expertly timed twists and shocks, very hard to put down.” —The Guardian (UK)

Adam Sternbergh is a contributing editor for New York magazine and Vulture. Formerly culture editor of The New York Times Magazine, his writing has appeared in GQ and the Times of London and on This American Life. He currently lives in Brooklyn with his family. Shovel Ready is his first novel. His second, Near Enemy, will be published in 2015.


www.adamsternbergh.com · @sternbergh
Loading...
or support indie stores by buying on
(This book is on backorder)