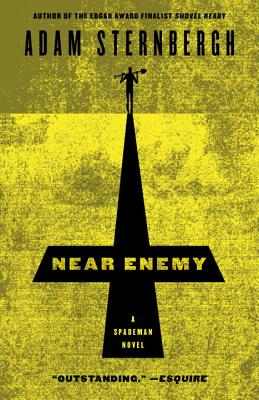 New York is toxic—decimated by a dirty bomb years ago.  The limnosphere is a virtual safe haven—if you’re rich enough to buy in.  Spademan is a hit man—box-cutter at the ready.

His latest job is to snuff out Lesser, a lowlife lurking around other people’s fantasies.  As Spademan is about to close the deal, Lesser comes back from the limn with a wild claim: terrorists are planning to attack New York. Again. This time from the inside out.

The warning sends Spademan down a dark path full of unsavory characters and startling revelations.  A shadowy political fixer tells him of a long-running power struggle that goes all the way to City Hall.  A brilliant Egyptian radical brings Spademan to the mysterious far-reaches of the limn.  And a beautiful nurse holds the secret to what, and who, is behind these attacks—and she seems to want to help Spademan stop them.  But he works best alone.  Or so he thinks.

Spademan has always had his share of enemies, but now they’re coming at him from all sides and it’s impossible to know whom to trust.  To stay sharp, his only option might be the one thing he swore he’d never do again.

Adam Sternbergh is a contributing editor for New York magazine and Vulture. Formerly culture editor of The New York Times Magazine, his writing has appeared in GQ and the Times of London and on This American Life. He currently lives in Brooklyn with his family. Near Enemy is his second novel.

Praise For Near Enemy: A Spademan Novel…

“Outstanding. . . . More fun than a book about the aftermath of a giant terrorist attack has any right to be.” —Esquire

“An impressively thrilling narrative of terrorism, virtual reality and never quite knowing who, or what, the enemy is.” —Time Out New York

“Fiction so fiery it will blister your subconscious. . . . Electric prose and shocking plot twists. . . . Sternbergh is quickly proving he requires permanent occupancy in the list of today’s best writers.” —The Free Lance-Star

"Violent, stylish, and even better than the first one." — Sydney Morning Herald

"Compelling. . . . Intellectually beguiling. . . . The fight scenes in Near Enemy blend the operatic elegance of Bruce Lee in flight with comic-book-inspired mayhem. . . . Popular fiction that engages one’s heart, mind, and adrenaline the way the Spademan novels do is something to be savored.” —Booklist (starred review)

“Sternbergh’s spare characterizations and vivid descriptions of a great city fallen on hard times will strike a chord with fans of classic noir as well as readers who like dystopian sf or thrillers with a cyberpunk flavor.” —Library Journal

“[The] action is played out in a postmodern and corrupt world of toxicity, both literal and metaphorical. . . . Other characters return from the first novel and provide a hint of nostalgia and sweetness missing from the dark and mean streets of New York.” —Kirkus

“[Sternbergh] skillfully blends elements of noir, sci-fi, and speculative fiction, and keeps the action and the dialogue energetic.” —The New Yorker

“Boy, does this plot drive. It’s one of those books so gripping you read the whole thing in a single go. . . . Swift, [with] expertly timed twists and shocks, very hard to put down.” —The Guardian (UK)


“Sternbergh’s prose is lean and sparse. . . . Shovel Ready is exciting. It starts fast and the author keeps his foot on the gas. The thrills feel earned.” —The Globe and Mail