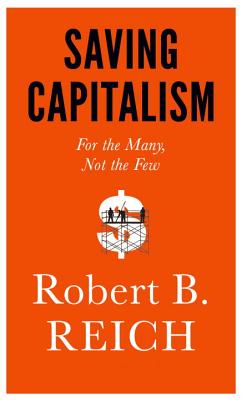 From the author of Aftershock and The Work of Nations, his most important book to date—a myth-shattering breakdown of how the economic system that helped make America so strong is now failing us, and what it will take to fix it.

Perhaps no one is better acquainted with the intersection of economics and politics than Robert B. Reich, and now he reveals how power and influence have created a new American oligarchy, a shrinking middle class, and the greatest income inequality and wealth disparity in eighty years. He makes clear how centrally problematic our veneration of the “free market” is, and how it has masked the power of moneyed interests to tilt the market to their benefit.

Reich exposes the falsehoods that have been bolstered by the corruption of our democracy by huge corporations and the revolving door between Washington and Wall Street: that all workers are paid what they’re “worth,” that a higher minimum wage equals fewer jobs, and that corporations must serve shareholders before employees. He shows that the critical choices ahead are not about the size of government but about who government is for: that we must choose not between a free market and “big” government but between a market organized for broadly based prosperity and one designed to deliver the most gains to the top. Ever the pragmatist, ever the optimist, Reich sees hope for reversing our slide toward inequality and diminished opportunity when we shore up the countervailing power of everyone else.

Passionate yet practical, sweeping yet exactingly argued, Saving Capitalism is a revelatory indictment of our economic status quo and an empowering call to civic action.

"Ambitious... Reich makes a very good case that widening inequality largely reflects political decisions that could have gone in very different directions... Saving Capitalism is a very good guide to the state we’re in." —The New York Review of Books

"One of Reich’s finest works, and is required reading for anyone who has hope that a capitalist system can indeed work the many, and not just the few." —Salon

“Like any good teacher, Robert Reich knows that making a simple yet crucial idea stick often takes much time and many presentations of the concept… In Saving Capitalism, Reich drives home a basic fact that, if widely understood, could lift America from today’s destructive political standoff.” —Chicago Tribune

“Engrossing… [Reich] is calmly articulate, not alarmist; yet a sense of urgency pulses through his unambiguous prose… Informative and necessary.” —Argonaut

"Audacious... Pragmatic... [Reich takes] on the very language used by the business world that perpetuates the myth that the private sector exists as magical sphere entirely unrelated to government." —EcoWatch

“Reich has both the stature and eloquence to make a compelling case… Highly recommended to all readers… Insightful.” —Library Journal, starred review

“An accessible examination of how the ‘apparent arbitrariness and unfairness of the economy [has] undermined the public's faith in its basic tenets.’ The author takes a measured view even as he argues against free market orthodoxies… Reich's overriding message is that we don't have to put up with things as they are.” —Kirkus

“Robert Reich has written a riveting guide to how our economic and political system has become so badly flawed, distorted by pervasive rent seeking and monopolies.  He explains our rising inequality and our poor economic performance.  Wholesale reform is needed—far beyond the usual prescriptions of raising the minimum wage and spending more money on education.” —Joseph Stiglitz

“Robert Reich sets the terms for new and more productive debates by rediscovering the political roots of the economic arrangements we too often take for granted. Everyone concerned with our economic future will need to grapple with Reich’s arguments in 2016 and beyond.” —Lawrence H. Summers

ROBERT B. REICH is Chancellor’s Professor of Public Policy at the Richard and Rhoda Goldman School of Public Policy at the University of California, Berkeley, and senior fellow at the Blum Center for Developing Economies. He has served in three national administrations and has written fourteen books, including The Work of Nations, which has been translated into twenty-two languages, and the best sellers Supercapitalism and Locked in the Cabinet. His articles have appeared in The New Yorker, The Atlantic, The New York Times, The Washington Post, and The Wall Street Journal. He is co-creator of the award-winning 2013 film Inequality for All. He is also chair of the national governing board of Common Cause. He lives in Berkeley.

robertreich.org
Loading...
or
Not Currently Available for Direct Purchase