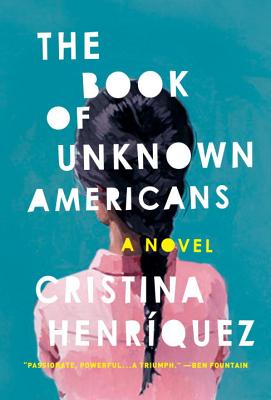 The Book of Unknown Americans

A triumph of storytelling. Henriquez pulls us into the lives of her characters with such mastery that we hang on to them just as fiercely as they hang on to one another and their dreams. This passionate, powerful novel will stay with you long after you ve turned the final page. Ben Fountain, author of "Billy Lynn's Long Halftime Walk"
A boy and a girl who fall in love. Two families whose hopes collide with destiny. An extraordinary novel that offers a resonant new definition of what it means to be American.
Arturo and Alma Rivera have lived their whole lives in Mexico. One day, their beautiful fifteen-year-old daughter, Maribel, sustains a terrible injury, one that casts doubt on whether she ll ever be the same. And so, leaving all they have behind, the Riveras come to America with a single dream: that in this country of great opportunity and resources, Maribel can get better.
When Mayor Toro, whose family is from Panama, sees Maribel in a Dollar Tree store, it is love at first sight. It's also the beginning of a friendship between the Rivera and Toro families, whose web of guilt and love and responsibility is at this novel's core.
Woven into their stories are the testimonials of men and women who have come to the United States from all over Latin America. Their journeys and their voices will inspire you, surprise you, and break your heart.
Suspenseful, wry and immediate, rich in spirit and humanity, "The Book of Unknown Americans" is a work of rare force and originality.


Praise For The Book of Unknown Americans…

“On a cold, bewildering night, the Riveras, who have just left their happy lives in Mexico, are dropped off at a dilapidated apartment building [in] Delaware. Alma Rivera worries about their beautiful 15-year-old daughter, Maribel, who has suffered a brain injury; her parents have sacrificed everything to send her to a special school. Their building turns out to be a sanctuary; as the Riveras’ dramatic tale unfolds, Henríquez brings their generous neighbors forward to tell the compelling stories of why and how they left Venezuela, Puerto Rico, Guatemala, Nicaragua, Colombia, Mexico, Panama, and Paraguay. As one man says, ‘We are the unknown Americans,’ those who are feared and hated. As Maribel opens up to the infatuated boy next-door, terror of the unknown becomes a tragic force. Each scene, voice, misunderstanding, and alliance is beautifully realized and brimming with feeling in the acclaimed Henríquez’s compassionately imagined, gently comedic, and profoundly wrenching novel of big dreams and crushing reality, courageous love and unfathomable heartbreak.” —Donna Seaman, Booklist (starred)

“Evoking a profound sense of hope, Henríquez delivers a moving account of those who will do anything to build a future for their children—even if it means confronting the fear and alienation lurking behind the American dream.” —Publishers Weekly

“Distinctively compassionate and original—a moving portrait of people who often pass before our eyes under a veil of invisibility. Gorgeously woven of both hope and delusion, and of the many kinds of love, this is a novel in which characters’ assimilations and aspirations are as much to a new country as to something even broader: to other, finer versions of themselves. As a reader I felt assimilated too, forever altered by the extraordinary world Henríquez creates.” —Heidi Julavits, author of The Vanishings

“Spectacular . . . highly believable and poignant . . . A well-written story set among ‘unknown Americans,’ ostensibly Hispanic but in many ways any family adjusting to a new culture and way of life, regardless of ethnicity.” —Lawrence Olszewski, Library Journal

“Cristina Henríquez has written an exquisite and profound novel of love, longing, and the resilience of the human spirit. Her characters may be invisible souls on the American landscape, but their stories leave an indelible mark on the heart.” —Gilbert King, Pulitzer Prize-winning author of Devil in the Grove

“The Book of Unknown Americans is filled with the fiercest kinds of love—of a boy for a beautiful girl, of stricken parents for an injured daughter, of an immigrant community for an impossible America. In this powerful novel, Cristina Henríquez gives us unforgettable characters, whose destinies are shaped by forces—senseless, random, political—far beyond their control, and yet whose resilience yields a most profound and unexpected kind of beauty.” —Ruth Ozeki, author of A Tale for the Time Being

“Wonderful. If most novels, or at least most good ones, are songs, then The Book of Unknown Americans is a choir. In a multiplicity of voices, each one distinct and authentic, Cristina Henríquez tells a whole community of stories, and the book that emerges is warm, wise, and unfailingly generous. It never seems to strive for profundity or grasp at poignancy, and yet page by page, as naturally as can be, it rouses the conscience and touches the heart.” —Kevin Brockmeier, author of The Brief History of the Dead and The Illumination

“Here is an important story about family, community and identity, told with elegance and compassion. The Book of Unknown Americans is unforgettable.” —Jami Attenberg, author of The Middlesteins

“Some of the characters in The Book of Unknown Americans were born in the United States, others came as adults or were brought here from Central and South America. Their stories speak to us, involve us in their lives. They dream, meet challenges, and dare to live on hope. Sometimes they cry, but they also laugh, dance, make love. In this beautiful book, Cristina Henríquez introduces us to their vibrant lives, to heartbreaking choices, to the tender beginnings of love, and to the humanity in every individual. Unforgettable.” —Esmeralda Santiago, author of When I Was Puerto Rican and Conquistadora

“Cristina Henríquez’s novel is a triumph not just of storytelling, but of American storytelling, a novel whose breadth and power blow open any traditional definition of ‘American.’ Henríquez pulls us into the lives of her characters with such mastery that we hang onto them just as fiercely as they hang onto one another, and their dreams. This passionate, powerful novel will stay with you long after you’ve turned the final page.” —Ben Fountain, author of Billy Lynn’s Long Halftime Walk

Cristina Henriquez is the author of the story collection "Come Together, Fall Apart, "which was a "New York Times "Editors Choice selection, and the novel "The World in Half." Her work has appeared in "The New Yorker, The Atlantic, The American Scholar, Glimmer Train, Virginia Quarterly Review, Ploughshares, TriQuarterly, AGNI, "and "Oxford American, "as well as in various anthologies. She lives in Illinois."
Loading...
or
Not Currently Available for Direct Purchase