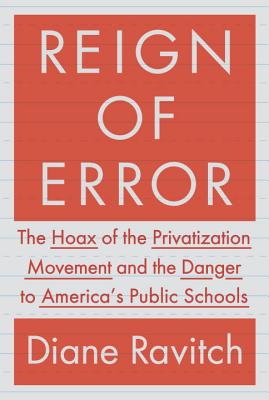 From one of the foremost authorities on education in the United States, former U.S. assistant secretary of education, “whistle-blower extraordinaire” (The Wall Street Journal), author of the best-selling The Death and Life of the Great American School System (“Important and riveting”—Library Journal), The Language Police (“Impassioned . . . Fiercely argued . . . Every bit as alarming as it is illuminating”—The New York Times), and other notable books on education history and policy—an incisive, comprehensive look at today’s American school system that argues against those who claim it is broken and beyond repair; an impassioned but reasoned call to stop the privatization movement that is draining students and funding from our public schools.
​In Reign of Error, Diane Ravitch argues that the crisis in American education is not a crisis of academic achievement but a concerted effort to destroy public schools in this country. She makes clear that, contrary to the claims being made, public school test scores and graduation rates are the highest they’ve ever been, and dropout rates are at their lowest point.

​She argues that federal programs such as George W. Bush’s No Child Left Behind and Barack Obama’s Race to the Top set unreasonable targets for American students, punish schools, and result in teachers being fired if their students underperform, unfairly branding those educators as failures. She warns that major foundations, individual billionaires, and Wall Street hedge fund managers are encouraging the privatization of public education, some for idealistic reasons, others for profit. Many who work with equity funds are eyeing public education as an emerging market for investors.
​Reign of Error begins where The Death and Life of the Great American School System left off, providing a deeper argument against privatization and for public education, and in a chapter-by-chapter breakdown, putting forth a plan for what can be done to preserve and improve it. She makes clear what is right about U.S. education, how policy makers are failing to address the root causes of educational failure, and how we can fix it.

​For Ravitch, public school education is about knowledge, about learning, about developing character, and about creating citizens for our society. It’s about helping to inspire independent thinkers, not just honing job skills or preparing people for college. Public school education is essential to our democracy, and its aim, since the founding of this country, has been to educate citizens who will help carry democracy into the future.


Praise For Reign of Error: The Hoax of the Privatization Movement and the Danger to America's Public Schools…

“The most clear-headed and influential critic of privatization is Diane Ravitch, who has earned a reputation as an independent thinker. Refusing to embrace the formulas of left and right, she attacks politically correct speech codes as intelligently as she criticizes the free-market faith in competition. She has also been willing to change her mind in public: at one time an advocate of standardized testing, she is now a skeptic. And this skepticism animates her broader critique in Reign of Error, a book that dispels the clouds of reform rhetoric to reveal the destructiveness of the privatization agenda.”
—Jackson Lear, Commonweal

“No matter what side of the debate the reader is on, Ms. Ravitch provides a thought-provoking look at some of the major challenges facing public education today.” —Pittsburgh Post-Gazette “Those who have grown increasingly alarmed at seeing public education bartered off piece by piece, and seeing schools and teachers thrown into a state of siege, will be grateful for this cri de Coeur—a fearless book, a manifesto, and a cry to battle.”
-Jonathan Kozol, New York Times Book Review

“Ravtich’s critique of the corporate reformers’ manufactured agenda, along with the truly progressive alternatives she offers, shows us a way to begin the long haul toward improving democracy’s classrooms.”
-Joseph Featherstone, The Nation

“Diane Ravitch [is] arguably our leading historian of primary and secondary education.”
-Andrew Delbanco, The New York Review of Books

“Ravitch has emerged as the most consistent and searching critic of the contemporary education-reform movement.”
-Walter Russell Mead, Foreign Affairs

“No education or social issues library should be without this book.”
-Diane C. Donovan, California Bookwatch

“The best word I can come up with to describe the Ravitch of today is muckraking – reform-minded journalism that aims to expose misconduct and conspiracy…We need public figures like Ravitch to highlight perilous trends (and illuminate promising trends)…Reign of Error is a must-read book.”
-Sam Chaltain, Education Week

“[Ravitch] presents real solutions, not only to improve our public schools, but also to improve the lives of the children who walk their halls.”
-Darcie Chimarusti, NewsWorks

“[Ravitch] is a devastating social critic who is well aware of the current political environment.  Ravitch is able to skewer this agenda so efficiently because she’s seen it all before…Ravitch’s candor stands in stark contrast to the bromides of the corporate reformers, who have pretty much left any attempts at integration out of their schemes.”
-NEA.org (National Education Association)

“Read this book and keep it somewhere within arm’s length for the next decade or so.”
-Jose Vilson, Educator, writer, activist

“Diane Ravitch has emerged as an iconic figure on America’s political landscape.  What Daniel Ellsberg was to the Vietnam War, Ravitch has become to the battle raging over public education – a truth-teller with the knowledge that comes from decades on the inside of the education ‘reform’ movement.”
-Anthony Cody, Education Week Teacher

“Reign of Error is a must-read; brilliant concise and elegant in dissecting and countering the corporate reform myths…You will never find a more succinct and compelling book than Reign of Error, with a crystal clear analysis of the way in which our schools are being driven into the ground by the Billionaire Boys club of Gates, Broad, Walton, Murdoch, and Bloomberg, and other ideologues and opportunists eager to join in.  We must win this battle for the soul of our education system before it’s too late.
-NYC Public School Parent

“Diane Ravitch is America’s foremost educational historian.  In each chapter Ravitch provides detailed, clear explanations of the relevant data… She is a thorough and careful scholar.  As important as her previous book was, Ravitch has outdone that with this magnum opus.  This book is by far her finest work, and something which everyone truly concerned about education should read.”
-Daily Kos

“I advise all public school teachers to read Ravitch’s book.  Her experience makes her writing rich.  Reformers do not like her because she exposes them…Her critics attack her personally because they cannot dent the substance that is Ravitch’s Reign of Error.  She has pulled their reformer pants down in public.  There they stand, red-faced and embarrassed.  Ravitch is fighting for us.  Buy the book.”
-The Huffington Post

“I knew a lot about what happened to black public schools in Mississippi, but had concerns about how to go about building a better system.  After reading REIGN OF ERROR I now know exactly how to proceed.  Mississippi is indeed the exception that the whole world believes it to be.  I promised God that if I kept living I would spend the rest of my life moving Mississippi blacks from the bottom to the top.  Thanks to Diane Ravitch I now know what has to be done.”
-James Meredith, author of Three Years in Mississippi

“Diane Ravitch is the Martin Luther King and Joan of Arc of American education, a fearless crusader for every American child, parent and teacher. In Reign of Error, she reveals the shocking lack of evidence behind many of the radical experiments being forced on our public school children and families by tragically misguided politicians and non-educators. Most important, she lays out a vision of evidence-based, authentic education reforms that hold great promise for America to lead and inspire the world again. Every American parent, teacher and citizen interested in our future should read this book. What Silent Spring and The Fate of the Earth did for the environmental and antinuclear movements, this book should do for the cause of improving America's public schools.
-William Doyle, author of A Soldier’s Dream

“Diane Ravitch's must read book makes a compelling case for the essential purpose of public education. She debunks the myths of its failures --and of the market reformers' successes-- and points to real doable investments that will make public education the gateway to the American dream for all our children.”
-Randi Weingarten, president of the American Federation of Teachers

“Diane Ravitch’s Reign of Error takes the myths surrounding public education head on and provides her readers with logic and reasoning sorely missing from the current debate.  Diane is a fierce warrior against the so-called reformers whose ideology exacerbates the problems of poverty and inequity.  Reign of Error takes on each of the common myths and blows them up with the reformers’ own holy grail – DATA!! Data that disputes the miracle schools, the effects of poverty and myth of the dropout factors. Ravitch also takes on the Billionaire Boys Club with swipes at their handmaidens of destruction, including Michelle Rhee, Joel Klein, and Wendy Kopp, and the book provides the solutions that will change the trajectory away from so-called destructive innovation towards equitable, high quality education for all children.”
—Karen GJ Lewis, president of the Chicago Teachers Union

“American educational reformers have fashioned a narrative that has become so pervasive that it has effectively silenced alternative accounts.  In this courageous book Diane Ravitch persuasively challenges both the narrative's presentation and analysis of data and its underlying value system.”

Diane Ravitch was born in Houston, Texas, and graduated from the Houston public schools, Wellesley College, and Columbia University. She is a research professor of education at New York University. She was appointed to the National Assessment Governing Board by President Bill Clinton in 1997 and 2001. Ravitch is the author of ten previous books. In 2011, she received the Daniel Patrick Moynihan Prize from the American Academy of Political and Social Science. Ravitch lives in Brooklyn, New York.