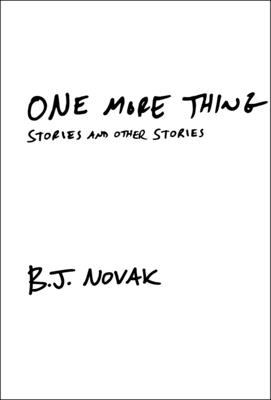 Stories and Other Stories

B.J. Novak's One More Thing: Stories and Other Stories is an endlessly entertaining, surprisingly sensitive, and startlingly original debut that signals the arrival of a brilliant new voice in American fiction.

Praise For One More Thing: Stories and Other Stories…

"B.J. blew me away. He just keeps kicking short fiction in the rear, making it run ahead clutching its ass, and then he runs up and kicks it some more, and the result is one of the most aggressively, insanely awesome debuts in a while." —Gary Shteyngart, author of Super Sad True Love Story

B.J. Novak is a writer and actor best known for his work on NBC’s Emmy Award-winning comedy series The Office as an actor, writer, director, and executive producer. He is also known for his stand up comedy performances and his roles in motion pictures such as Quentin Tarantino’s Inglourious Basterds and Disney’s Saving Mr. Banks. He is a graduate of Harvard University with a degree in English and Spanish literature.