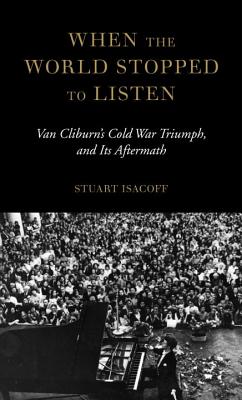 When the World Stopped to Listen

From the acclaimed author of A Natural History of the Piano, the captivating story of the 1958 international piano competition in Moscow, where, at the height of Cold War tensions, an American musician showed the potential of art to change the world.

April of 1958--the Iron Curtain was at its heaviest, and the outcome of the Tchaikovsky International Piano Competition seemed preordained. Nonetheless, as star musicians from across the globe descended on Moscow, an unlikely favorite emerged: Van Cliburn, a polite, lanky Texan whose passionate virtuosity captured the Russian spirit.

This is the story of what unfolded that spring--for Cliburn and the other competitors, jurors, party officials, and citizens of the world who were touched by the outcome. It is a behind-the-scenes look at one of the most remarkable events in musical history, filled with political intrigue and personal struggle as artists strove for self-expression and governments jockeyed for prestige. And, at the core of it all: the value of artistic achievement, the supremacy of the heart, and the transcendent freedom that can be found, through music, even in the darkest moments of human history.

"A tightly focused monograph that profits from the fact that its author is himself a pianist... If you want to know why Cliburn played the way he played—and how his distinctive style helped him win—then Mr. Isacoff is your man." —The Wall Street Journal

“Stuart Isacoff is a music scholar, and a superb one… This was a fascinating and important event… A juicy book.” —The National Review

"I have never read a more beautiful or penetrating description of Cliburn’s Moscow triumph… In a book that is sympathetic but honest, When the World Stopped to Listen describes the terrible toll Moscow and its aftermath eventually extracted from the pianist… Through this book, it seems we can finally know Van Cliburn.” —Ft. Worth Star-Telegram

"The most fascinating history books search beyond the decisions of great men and women and illuminate how those larger struggles affected those who did not make policy, such as musicians. Isacoff has done an excellent job of focusing on a smaller story in context of the Cold War... More than a history of this historic competition, Isacoff’s book is a testament to the power music has to transcend differences." —Durham Herald-Sun

“For a real insight into Van Cliburn’s character, the inside story of the Moscow competition and the pianist’s subsequent decline, the book to turn to is Stuart Isacoff’s When the World Stopped to Listen… [Isacoff] approaches the subject with the seasoned eye of a classical music journalist… Riveting.” —Gramophone

“In this compelling, historically vivid account of Van Cliburn’s impact on the piano universe of the second half of the twentieth century, author Stuart Isacoff has written a page-turner that resonates long after the final sentence… You simply must read this book.” —American Music Teacher

“Stuart Isacoff brings both a pianist’s insights and a historian’s rigor to an event that shook the musical world—indeed, the world at large—almost six decades ago… Detailed and vivid.” —Classical Voice

"A polished, chatty retelling of the most consequential competition in the political history of classical music. Isacoff pulls aside the curtain on the competition, from the backroom dealings to the (disgusting and dangerous) contents of the drug cocktail that fueled Cliburn to victory. He combines a sharp, unsparing biographical eye with a mastery of the musical and social history of the time." —Book Reporter

“Revealing… [Isacoff] takes readers behind the scenes of the 1958 Tchaikovsky International Piano Competition and puts it within the context of world affairs of the day.... Compelling.” —Indulge Magazine

"Well-researched... Assures that [Cliburn] won’t be just a footnote in the annals of piano artistry." —The New York Journal of Books

“Fans of pianist Van Cliburn—and there are many, the world over—can rejoice... Illuminating... Essential reading for music lovers.” —Booklist

“When the World Stopped to Listen is a great book about a great American musician who, in the tensions of Cold War, helped move our world from war to peace, from direct confrontation to peaceful coexistence.” —Sergei Khrushchev, author, Khrushchev in Power

"Stuart Isacoff's book is an exciting, thorough, and deeply moving reminder of Van Cliburn's triumph at the Tchaikovsky Competition. His penetrating comments on the elements that made Cliburn's playing so profoundly involving, and his sympathetic chronicle of the pianist's life, make this book a most satisfying experience." —Emanuel Ax, musician

"A gripping story of an iconic American pianist, set in a dark era of the Cold War. A great read, not only for musicians, marvelously researched and written. I couldn't put the book down." —Yefim Bronfman, concert pianist

“Stuart Isacoff lets us relive the career-birth of an American musical hero and a politically momentous event as profound as the collapse of the Berlin Wall. Beautifully written, this is an insider's report of the onstage and offstage drama around the 1958 triumph of Van Cliburn and the incredible musical events that led to a Cold War ‘thaw’ which changed the musical and political history of the world.” —André Watts, concert pianist

"When the World Stopped to Listen, a remarkably candid, sensitive, and level-headed narration of Van Cliburn’s life, paints a broad and enlightening picture of the Soviet Union and the United States during Cliburn’s musical ascendency. His triumph and subsequent career can be understood only in the context of Cold War political, social, and musical tensions, a heady mix that Stuart Isacoff examines with unusual skill." —Garrick Ohlsson, concert pianist

“Extensively researched and illuminating, When the World Stopped to Listen revisits the 1958 Tchaikovsky Competition in Moscow from a broader perspective, providing a behind-the-scenes look at the event and its elusive winner, Van Cliburn.” —Barbara Jepsen, President, Music Critics Association of North America

“Within the orbit of complex musical and Cold War intrigues, Stuart Isacoff, a stellar researcher, tells a spellbinding, even a startling, adventure story, starring the legendary American pianist: a life of triumph and tragedy.” —David Dubal, The Juilliard School

“With Van Cliburn's remarkable victory in the 1958 Tchaikovsky Competition as centerpiece, Stuart Isacoff has given us a sensitive, in-depth portrait of the triumphs and tragedies which plagued Cliburn for the rest of his life.” —Martin Bookspan, broadcaster

“The singular odyssey of the Cold War’s remarkable pianistic icon is recounted in a breathtaking synergy of unprecedented worldwide scholarship, fervent musical insight, and virtuoso storytelling. Stuart Isacoff recreates in telling detail the sights and sounds of an extraordinary time and voyage, one whose resonance continues both musically and diplomatically to this day. For any follower of matters cultural, societal, or historical, this is a volume that is most simply, and admirably, indispensable.” —Sara Davis Buechner, pianist

STUART ISACOFF is a pianist, writer, and the founder of Piano Today magazine, which he edited for nearly three decades. A winner of the ASCAP Deems Taylor Award for excellence in writing about music, he is a regular contributor to The Wall Street Journal and many other publications. He is also the author of The Natural History of the Piano and Temperament: How Music Became a Battleground for the Great Minds of Western Civilization. He lives in Closter, New Jersey.
Loading...
or
Not Currently Available for Direct Purchase