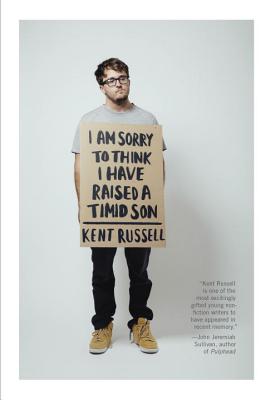 I Am Sorry to Think I Have Raised a Timid Son

From one of the most ferociously brilliant and distinctive young voices in literary nonfiction: a debut shot through with violence, comedy, and feverish intensity that takes us on an odyssey into an American netherworld, exposing a raw personal journey along the way.
Locked in battle with both his adult appetites and his most private childhood demons, Kent Russell hungers for immersive experience and revelation, and his essays take us to society's ragged edges, the junctures between savagery and civilization. He pitches a tent at an annual four-day music festival in Illinois, among the misunderstood, thick-as-thieves fans who self-identify as Juggalos. He treks to the end of the continent to visit a legendary hockey enforcer, the granddaddy of all tough guys, to see how he's preparing for his last foe: obsolescence. He spends a long weekend getting drunk with a self-immunizer who is willing to prove he has conditioned his body to withstand the bites of the most venomous snakes. He insinuates himself with a modern-day Robinson Crusoe on a tiny atoll off the coast of Australia. He explores the Amish obsession with baseball, and his own obsession with horror, blood, and guts. And in the piercing interstitial meditations between these essays, Russell introduces us to his own raging and inimitable forebears.
I Am Sorry to Think I Have Raised a Timid Son, blistering and deeply personal, records Russell's quest to understand, through his journalistic subjects, his own appetites and urges, his persistent alienation, and, above all, his knotty, volatile, vital relationship with his father. In a narrative that can be read as both a magnificent act of literary mythmaking and a howl of filial despair, Russell gives us a haunting and unforgettable portrait of an America and a paradigm of American malehood we have never before seen.