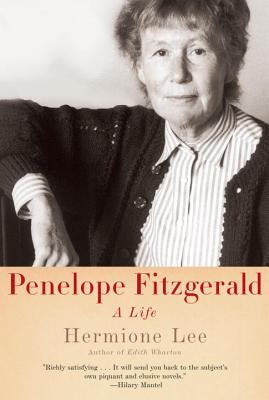 “As always with Lee's work, her latest biography offers a detailed and fascinating view of her subject's life. Penelope Fitzgerald was a teacher, a scholar, a world-class novelist, a two-time winner of Britain's Man Booker Prize, and a devoted mother and wife. Fitzgerald came late to fame, and this meticulously researched and beautifully written biography reveals every facet of her life in the most intimate way. I loved it!”
— Kathy Ashton, The King's English, Salt Lake City, UT
View the List

ONE OF THE NEW YORK TIMES BOOK REVIEW S 10 BEST BOOKS OF THE YEAR
A Best Book of the Year: San Francisco Chronicle, Seattle Times
Winner of the Plutarch Award for Best Biography
The acclaimed biographer of Edith Wharton and Virginia Woolf gives us an intimate portrait of one of the most quietly brilliant novelists of the twentieth century.
Penelope Fitzgerald was a great English writer whose career didn't begin until she was nearly sixty. She would go on to win some of the most coveted awards in literature the Booker Prize and the National Book Critics Circle Award.
Now, in an impeccable match of talent between biographer and subject, Hermione Lee, a master biographer and one of Fitzgerald's greatest champions, gives us this remarkable writer's story. Lee's critical expertise is on dazzling display on every page, as it illuminates this extraordinary English life. Fitzgerald, born into an accomplished intellectual family, the granddaughter of two bishops, led a life marked by dramatic twists of fate, moving from a bishop's palace to a sinking houseboat to a last, late blaze of renown. We see Fitzgerald's very English childhood in the village of Hampstead; her Oxford years, when she was known as the blonde bombshell; her impoverished adulthood as a struggling wife, mother and schoolteacher, raising a family in difficult circumstances; and the long-delayed start to her literary career.
Fitzgerald's early novels draw on her own experiences working at the BBC in wartime, at a bookshop in Suffolk, at an eccentric stage school in the 1960s while her later books open out into historical worlds that she, magically, seems to entirely possess: Russia before the Revolution, postwar Italy, Germany in the time of the Romantic writer Novalis. Fitzgerald's novels are short, spare masterpieces, and Hermione Lee unfurls them here as works of genius. Expertly researched, written out of love and admiration for this wonderful author's work, Penelope Fitzgerald is literary biography at its finest an unforgettable story of lateness, persistence and survival.

Hermione Lee is a biographer, critic, teacher of literature, and president of Wolfson College, University of Oxford. Among her many works are literary biographies of Willa Cather, Virginia Woolf, Edith Wharton, and Penelope Fitzgerald, which won the James Tait Black Prize and the Plutarch Award for Best Biography. She is also the author of critical books on Elizabeth Bowen and Philip Roth. She is a Fellow of the British Academy and the Royal Society of Literature, and a Foreign Honorary Member of the American Academy of Arts and Sciences. She was made a CBE in 2003 for services to literature, and a DBE in 2013 for services to literary scholarship. She lives in Oxford and Yorkshire. www.hermionelee.com"
Loading...
or
Not Currently Available for Direct Purchase