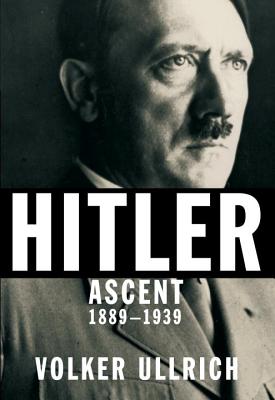 A major new biography—an extraordinary, penetrating study of the man who has become the personification of evil.

“Ullrich reveals Hitler to have been an eminently practical politician—and frighteningly so. Timely… One of the best works on Hitler and the origins of the Third Reich to appear in recent years.”
—Kirkus Reviews

“An outstanding study… All the huge, and terrible moments of the early Nazi era are dissected…but the real strength of this book is in disentangling the personal story of man and monster.”
—The Guardian (U.K.)

For all the literature about Adolf Hitler there have been just four seminal biographies; this is the fifth, a landmark work that sheds important new light on Hitler himself. Drawing on previously unseen papers and a wealth of recent scholarly research, Volker Ullrich reveals the man behind the public persona, from Hitler's childhood to his failures as a young man in Vienna to his experiences during the First World War to his rise as a far-right party leader. Ullrich deftly captures Hitler's intelligence, instinctive grasp of politics, and gift for oratory as well as his megalomania, deep insecurity, and repulsive worldview.

Many previous biographies have focused on the larger social conditions that explain the rise of the Third Reich. Ullrich gives us a comprehensive portrait of a postwar Germany humiliated by defeat, wracked by political crisis, and starved by an economic depression, but his real gift is to show vividly how Hitler used his ruthlessness and political talent to shape the Nazi party and lead it to power. For decades the world has tried to grasp how Hitler was possible. By focusing on the man at the center of it all, on how he experienced his world, formed his political beliefs, and wielded power, this riveting biography brings us closer than ever to the answer.

Translated from the German by Jefferson Chase.

“A wonderful array of well-chosen anecdotes…Mr. Ullrich is a journalist rather than an academic, which partly explains one of the book’s many positive features — its remarkable fluency and readability…[F]or an entirely sound, interesting and even entertaining account, Mr. Ullrich’s study can be thoroughly recommended as a most worthwhile addition to the voluminous literature on the man.”
—Neil Gregor, The Wall Street Journal

“The author deals with the usual turns, such as Hitler’s rough years as an aspiring artist and the horrors of trench warfare in World War I, but he adds welcome observations and interesting asides along the way…Timely, given the increase in right-wing intransigence throughout the world, and one of the best works on Hitler and the origins of the Third Reich to appear in recent years.”
—Kirkus

“[A] fascinating Shakespearean parable about how the confluence of circumstance, chance, a ruthless individual and the willful blindness of others can transform a country — and, in Hitler’s case, lead to an unimaginable nightmare for the world.”
–Michiko Kakutani, The New York Times

“This is, by any measure, an outstanding study… Learned, calm and riveting… All the huge, and terrible moments of the early Nazi era are dissected, from the early beer hall speeches, to the failed putsch, through the economic and social dislocation of Weimar and the opportunities that presented… The political history is meticulously told. But the real strength of this book is in disentangling the personal story of man and monster… Ullrich’s rigour and sensitivity enables him to succeed.”
—John Kampfner, The Guardian (U.K.)

"A superb biography of the Führer’s pre-war years…Readable and compelling… This biography stands apart thanks to Ullrich’s refusal to buy into the idea—assiduously fostered by the Fuhrer himself—that Hitler was invulnerable… The contradictory vulnerabilities that he calmly exposes heighten the power of this extraordinary portrait… It is a tribute to Ullrich’s absorbing biography that one contemplates its second volume with a shudder."
—Miranda Seymour, Daily Telegraph (U.K)

“Striking… A highly detailed and always interesting critical narrative of [Hitler’s] political life… What mark[s] him out is his conscious abandonment of conventional morality: the monstrous, shameless ease with which he lied, betrayed and murdered…Ullrich’s narrative of Hitler’s rise to power… is full, intelligent and lucidly written.”
—Neal Ascherson, The London Review of Books

“It succeeds brilliantly … [deserves] to be read as widely as possible.”
— David Aaronovitch, The Times “Book of the Week” (U.K)

"In a most impressive and massive account, [Volker Ullrich] adds telling details and subtle nuances to the dictator’s portrait and provides a fresh perspective on his rise. The result is a must-read book that is bound to be a critical and commercial success."
—Robert Gellately, Times Higher Education

“Fine biography… Where Ullrich adds greatly to our understanding is by making the mercurial, changeable and…profoundly unknowable Hitler believable… This is a major achievement… Impressive and revealing biography.”
—Nicholas Stargardt, Literary Review

“Volker Ullrich compellingly tells us once again that no one could have been under any illusion about Hitler’s general intentions towards the Jews from his very first appearance as a political figure, even if the detailed planning of genocide took some time to solidify… Insightful … Acutely argued… One of the more unexpected questions we are left with by a study of political nightmare such as Ullrich’s excellent book is how we find the resources for identifying the absurd as well as for clarifying the grounds of law and honour.”
—Rowan Williams, The New Statesman

"Volker Ullrich works like a master chef: he trusts his ingredients and uses them with great care. The Hitler that emerges is droll, clever, hysterical, and at the same time alarmingly pragmatic; the reader is able to follow his development from oddball to messiah, propelled forwards by the dynamics between the Fuhrer and his people. Ullrich describes what happened: nothing more, nothing less. And it is exactly this impressive restraint which gives the book its two important qualities: it is both reliable and enormously entertaining."
—Timur Vermes, author of Look Who's Back

"The first volume of Volker Ullrich’s monumental new biography, Adolf Hitler: Die Jahre des Aufstiegs 1889-1939, is beautifully written, as befits the experienced journalist, and deeply and freshly researched, with many new details and a finely balanced judgement, as one would expect from the trained historian."
—Sir Richard J. Evans, Times Higher Education “Best Books of 2013”

“Ullrich’s attention to detail during this period of Adolf Hitler’s life is exceptional… If the second volume is as informative and interesting as the first, it will be a valuable collection for those interested in this era and those who are just learning about it.”
—Judith Reveal, New York Journal of Books

VOLKER ULLRICH is a historian and journalist whose previous books in German include biographies of Bismarck and Napoleon, as well as a major study of Imperial Germany, Die nervöse Grossmacht 1871–1918 (The Nervous Superpower). From 1990 to 2009, Ullrich was the editor of the political book review section of the influential weekly newspaper Die Zeit.
Loading...
or
Not Currently Available for Direct Purchase