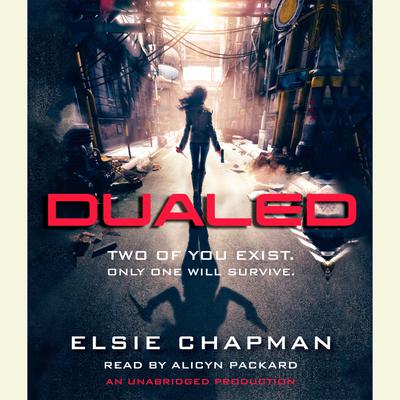 The Hunger Games meets Matched in this high-concept thriller where citizens must prove their worth by defeating the other version of themselves—their twin.

Two of you exist. Only one will survive.

West Grayer is ready. She's trained for years to confront her Alternate, a twin raised by another family. Survival means a good job, marriage—life.

But then a tragic misstep leaves West questioning: Is she the best version of herself, the version worthy of a future?

If she is to have any chance of winning, she must stop running not only from herself, but also from love . . . though both have the power to destroy her.

"A gripping, thought-provoking thriller that keeps your heart racing and your palms sweaty. . . . The kind of book Katniss Everdeen and Jason Bourne would devour." —Andrew Fukuda, author of the Hunt series

"Full of unexpected turns. . . . Fans of the Divergent trilogy will want to read this imaginative tale." —VOYA

"A fast ride from first to final pages, Dualed combines action and heart." —Mindy McGinnis, author of Not a Drop to Drink

"Intense and swift, Dualed grabbed me by the throat and kept me turning pages all the way to the end. Romance and action fans alike will love it." —Elana Johnson, author of the Possession series

"Stylish, frenetic, and violent, . . . the textual equivalent of a Quentin Tarantino movie."—Publishers Weekly

"A double dose of intensity and danger in this riveting tale of survival, heartache, and love."—Kasie West, author of Pivot Point

"This thought-provoking survival-of-the-fittest story will leave you breathless for more." —Ellen Oh, author of Prophecy

ELSIE CHAPMAN grew up in Prince George, British Columbia, Canada, before graduating from the University of British Columbia with a BA in English literature. She lives in Vancouver with her husband and two children, where she writes to either movies on a loop or music turned up way too loud (and sometimes both at the same time). Dualed is her first novel.