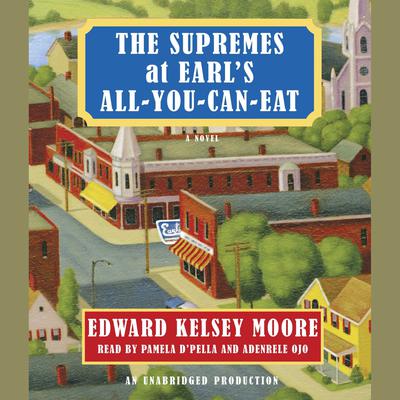 Earl’s All-You-Can-Eat is home away from home for this inseparable Plainview, Indiana, trio.  Dubbed “the Supremes” by high school pals in the tumultuous 1960s, they weather life’s storms together for the next four decades. Now, during their most challenging year yet, dutiful, proud, and talented Clarice must struggle to keep up appearances as she deals with her husband’s humiliating infidelities. Beautiful, fragile Barbara Jean is rocked by the tragic reverberations of a youthful love affair. And fearless Odette engages in the most terrifying battle of her life while contending with the idea that she has inherited more than her broad frame from her notorious pot-smoking mother, Dora.

Through marriage, children, happiness, and the blues, these strong, funny women gather each Sundayat the same table at Earl’s diner for delicious food, juicy gossip, occasional tears, and uproarious banter.

With wit and love, style and sublime talent, Edward Kelsey Moore brings together four intertwined love stories, three devoted allies, and two sprightly earthbound spirits in a big-hearted debut novel that embraces the lives of people you will never forget.

EDWARD KELSEY MOORE has enjoyed a long career as a cellist. His short fiction has appeared in Indiana Review, African American Review, and Inkwell, among other journals. His short story, "Grandma and the Elusive Fifth Crucifix" was selected as an audience favorite on National Public Radio's Stories on Stage series.