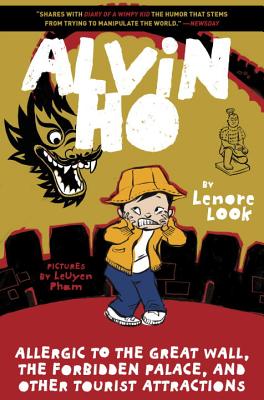 Allergic to the Great Wall, the Forbidden Palace, and Other Tourist Attractions

Alvin and his family visit China in the hilarious chapter book series that tackles anxiety in a fun, kid-friendly way. Perfect for both beginning and reluctant readers, and fans of Diary of a Wimpy Kid!

Alvin, an Asian American second grader who’s afraid of everything, is taking his fears to a whole new level—or should we say, continent. On a trip to introduce brand-new baby Ho to relatives in China, Alvin’s anxiety is at fever pitch. First there’s the harrowing 16-hour plane ride; then there’s a whole slew of cultural differences to contend with: eating lunch food for breakfast, kung fu lessons, and acupuncture treatment (yikes!). Not to mention the crowds that make it easy for a small boy to get lost.

Praise For Alvin Ho: Allergic to the Great Wall, the Forbidden Palace, and Other Tourist Attractions…

"Look's . . . intuitive grasp of children's emotions is rivaled only by her flair for comic exaggeration."
—Publishers Weekly, starred review

“Shares with Diary of a Wimpy Kid the humor that stems from trying to manipulate the world.”
—Newsday

LeUyen Pham is the award-winning and critically acclaimed illustrator of more than one hundred books for children. Her picture books include Bear Came Alongby Richard T. Morris, named a Caldecott Honor Book, as well as Grace for President by Kelly DiPucchio and the Vampirina Ballerina series by Anne Marie Pace. She is also the illustrator of Princess in Black, the New York Times-bestselling middle grade series by Shannon and Dean Hale, and the co-creator, along with Shannon Hale, of the New York Times-bestselling graphic memoirs Real Friends and Best Friends. Her most recent author-illustrator book, Outside, Inside, is a recollection of our year in lockdown.
Loading...
or
Not Currently Available for Direct Purchase