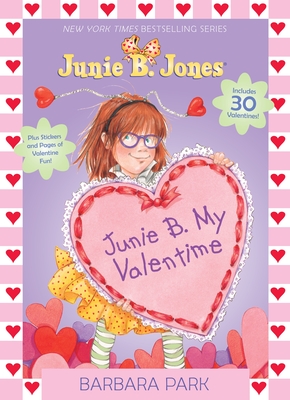 Junie B. My Valentime (Junie B. Jones)

Get ready for the world's funniest Valentines from Junie B. Jones! Junie B. Jones and the Mushy Gushy Valentimes has sold over 2 million copies, and now fans can bring Junie. B's hilarious attitude to their own celebrations with these original Valentimes to share with classmates, friends and family!

Kids will love the silly cards and 2 pages of stickers, and parents and teachers will love having their kids give book-based Valentines! Guaranteed to be a hit at any classroom celebration.

BARBARA PARK is best known as the author of the wildly popular New York Times bestselling Junie B. Jones series, which has kept kids (and their grown-ups) laughing—and reading—for over two decades. Beloved by millions, the Junie B. Jones books have been translated into multiple languages and are a time-honored staple in elementary school classrooms around the world. Barbara once said, “I’ve never been sure whether Junie B.’s fans love her in spite of her imperfections…or because of them. But either way, she’s gone out into the world and made more friends than I ever dreamed possible.”

Barbara Park is also the author of award-winning middle grade novels and bestselling picture books, including Skinnybones, Mick Harte Was Here, and Ma! There’s Nothing to Do Here!

Barbara Park was born in New Jersey in 1947 and spent most of her adult life in Arizona, where she and her husband, Richard, raised two sons. Barbara died in 2013, but her legacy lives on in the laughter her books give to readers all over the world.


DENISE BRUNKUS's entertaining illustrations have appeared in over fifty books, including each Junie B. title. She lives in Massachussetts with her husband and daughter.
Loading...
or support indie stores by buying on