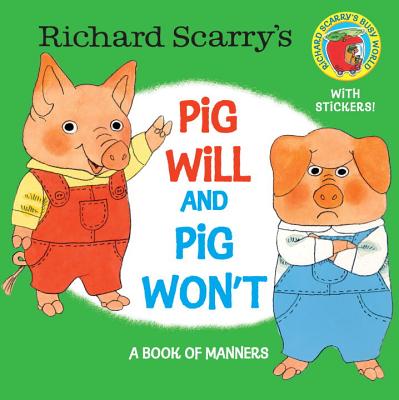 Richard Scarry and his beloved characters Pig Will and Pig Won't introduce toddlers to the important concept of manners. From helping around the house to playing nicely with friends, the lessons in this charming and accessible story will have children eager to use their manners. Includes one sheet of stickers!

Generations of children around the world have grown up spending hours poring over books by the late RICHARD SCARRY filled with all the colorful details of their daily lives. No other illustrator has shown such a lively interest in the words and concepts of early childhood. Scarry began his career at Golden Books in the 1940s, and he remains one of the world's best-loved children's authors EVER! He was posthumously awarded a Lifetime Achievement Award from the Society of Illustrators in 2012.
Loading...
or support indie stores by buying on
(This book is on backorder)