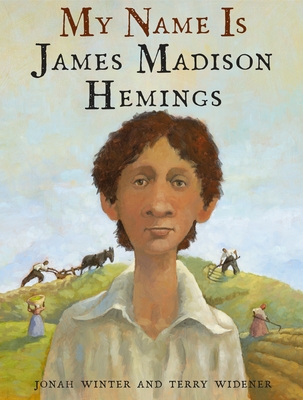 My Name Is James Madison Hemings

A powerful historical picture book about the child of founding father Thomas Jefferson and the enslaved Sally Hemings.

In an evocative first-person account accompanied by exquisite artwork, Winter and Widener tell the story of James Madison Hemings’s childhood at Monticello, and, in doing so, illuminate the many contradictions in Jefferson’s life and legacy. Though Jefferson lived in a mansion, Hemings and his siblings lived in a single room. While Jefferson doted on his white grandchildren, he never showed affection to his enslaved children. Though he kept the Hemings boys from hard field labor—instead sending them to work in the carpentry shop—Jefferson nevertheless listed the children in his “Farm Book” along with the sheep, hogs, and other property. Here is a profound and moving account of one family’s history, which is also America’s history.

An author's note includes more information about Hemings, Jefferson, and the author's research.

"This gentle, emotional book is a reminder that many presidents’ biographies have distressing aspects. . . . A simple but historically solid introduction to some of the moral crises slavery presented for our nation." --The New York Times

Praise For My Name Is James Madison Hemings…

"This gentle, emotional book is a reminder that many presidents’ biographies have distressing aspects. . . . A simple but historically solid introduction to some of the moral crises slavery presented for our nation." —The New York Times

"Moving.... Stirs up a potent mixture of grief, anger, and pride at the history of black people’s fight for access to the ballot box." —The New York Times

"A much-needed picture book that will enlighten a new generation about battles won and a timely call to uphold these victories in the present." —Kirkus Reviews, Starred

"A valuable introduction to and overview of the civil rights movement." —Publishers Weekly, Starred

"An important book that will give you goose bumps." —Booklist, Starred

Terry Widener has collaborated with Jonah Winter on two previous picture books: Steel Town and You Never Heard of Willie Mays?! He is the illustrator of many award-winning picture books, such as Lou Gehrig: The Luckiest Man by David A. Adler, a Boston Globe–Horn Book Honor Book and an ALA-ALSC Notable Children’s Book; The Babe & I, also by David A. Adler, recipient of the California Young Reader Medal; and Girl Wonder: A Baseball Story in Nine Innings by Deborah Hopkinson, a Parents’ Choice Gold Award Winner and a Nick Jr. Family Magazine Best Book of the Year. Visit him at TerryWidenerArt.com.
Loading...
or
Not Currently Available for Direct Purchase