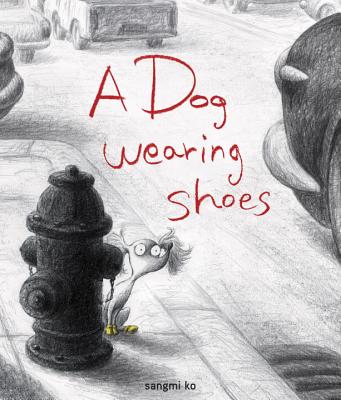 When Mini finds a small moppet of a dog, with fluffy ears, no collar, and wearing yellow booties, she understandably wants to take it home. Despite Mom's insistence that the dog probably already has a family, Mini gets attached and is awfully proud of her new pal, who can sing, sit, and give both paws. But when the pup runs off one day at the park, Mini comes to understand how someone else out there might be missing the little guy too.

This story, by a debut author/illustrator, perfectly captures the undeniable bond between dog and owner.

"A charming tale of compassion and empathy, with a resonant message about getting your new best friend at the animal shelter." —Patrick McDonnell, creator of MUTTS

Praise For A Dog Wearing Shoes…

Sangmi Ko makes her picture book debut with A Dog Wearing Shoes, which is based on a true story. Her niece once found a lost dog with shoes on, and after returning him to his owner, she adopted a dog named Ray. Sangmi lives and works in Seoul, South Korea, with two adopted dogs, White and Malti.
Loading...
or support indie stores by buying on
(This book is on backorder)