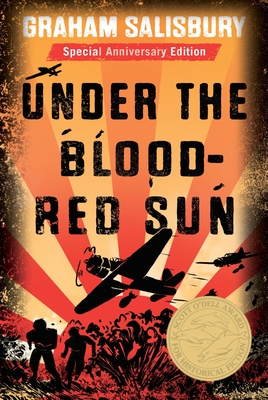 Under the Blood-Red Sun (Prisoners of the Empire Series #1)

Tomi was born in Hawaii. His grandfather and parents were born in Japan, and came to America to escape poverty.

World War II seems far away from Tomi and his friends, who are too busy playing ball on their eighth-grade team, the Rats.

But then Pearl Harbor is attacked by the Japanese, and the United States declares war on Japan. Japanese men are rounded up, and Tomi’s father and grandfather are arrested. It’s a terrifying time to be Japanese in America. But one thing doesn’t change: the loyalty of Tomi’s buddies, the Rats.

Winner of the Scott O’Dell Award for Historical Fiction

Graham Salisbury’s family has been in the Hawaiian Islands since the early 1800s. He currently lives with his family in Portland, Oregon. He is the author of the award-winning Blue Skin of the Sea and Lord of the Deep.
Loading...
or
Not Currently Available for Direct Purchase