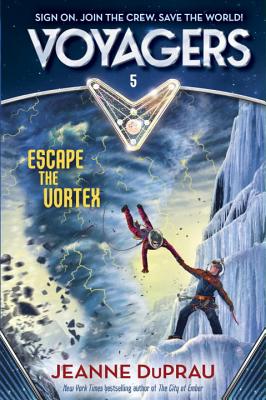 The action is on the page, on your device, and out of this world! This multiplatform series is part sci-fi, all action-adventure. And you don’t have long to wait—six books are coming all in one year!

Earth is in danger! The only thing that can save our planet are six essential elements that can fuse into a new source of clean energy. But the elements are scattered throughout the galaxy. And it’s up to the Voyagers—a team of four remarkable kids and an alien—to gather them all and return to Earth.

The Voyagers' fifth stop is Planet Tundra and it may look like a giant marshmallow, but this is no winter wonderland—it’s a winter nightmare! This frozen landscape is the deadliest the Voyagers have encountered yet. Then, when the Omega team finds themselves in trouble, only Team Alpha can save them. But if the tables were turned, would the Omegas do the same?

Do you have what it takes to be a Voyager? Find out at VoyagersHQ.com.

JEANNE DuPRAU is the bestselling author of the City of Ember series, which includes The City of Ember, The People of Sparks, The Diamond of Darkhold, and The Prophet of Yonwood. Her books have garnered numerous awards, and have appeared on more than thirty state lists. The City of Ember was made into a feature movie in 2008. Jeanne lives in Menlo Park, California. Find her at jeanneduprau.com.
Loading...
or
Not Currently Available for Direct Purchase