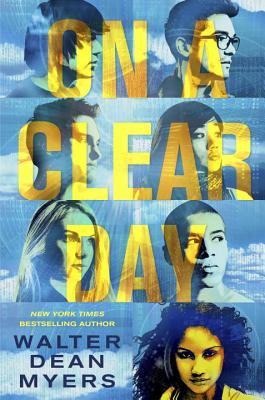 On a Clear Day (Hardcover)

"Visionary. This book should be in every reader's hands." –JACQUELINE WOODSON, National Book Award-winning author of Brown Girl Dreaming

Young heroes decide that they are not too young or too powerless to change their world in this gripping, futuristic young adult novel by the New York Times bestselling author of the Printz Award–winning Monster.

It is 2035. Teens, armed only with their ideals, must wage war on the power elite.

Dahlia is a Low Gater: a sheep in a storm, struggling to survive completely on her own. The Gaters live in closed safe communities, protected from the Sturmers, mercenary thugs. And the C-8, a consortium of giant companies, control global access to finance, media, food, water, and energy resources—and they are only getting bigger and even more cutthroat. Dahlia, a computer whiz, joins forces with an ex-rocker, an ex-con, a chess prodigy, an ex-athlete, and a soldier wannabe. Their goal: to sabotage the C-8. But how will Sayeed, warlord and terrorist, fit into the equation?

Praise for ON A CLEAR DAY:

“Walter Dean Myers was such a visionary. On a Clear Day is at once historical and futuristic, thoughtful and thought-provoking. It should be in every reader's hands. It's a book for anyone who has ever given thought to our own future and the futures of those coming behind us. Stunning.” –JACQUELINE WOODSON, National Book Award-winning author of Brown Girl Dreaming

"In his last book, Myers has turned his thoughtful attention to matters of pressing global importance and issued an implicit challenge to his teen readers to become involved and make a difference. It makes for a stirring valedictory." –Booklist

"Worth serious YA consideration." –The Bulletin of the Center for Children's Books

1937–2014
Walter Dean Myers’s fiction and nonfiction books have reached millions of young people. A prolific author of more than one hundred titles, he received every major award in the field of children’s literature. He wrote two Newbery Honor Books, eleven Coretta Scott King Award winners, three National Book Award finalists, and the winner of the first Michael L. Printz Award for Excellence in Young Adult Literature. He also received the Margaret A. Edwards Award for lifetime achievement in writing for young adults and was the first recipient of the Coretta Scott King–Virginia Hamilton Award for Lifetime Achievement. He was a 2010 United States nominee for the Hans Christian Andersen Award and was nominated for the Astrid Lindgren Award numerous times. From 2012 to 2013, he served as the National Ambassador for Young People’s Literature with the platform “Reading is not optional.” In his most-beloved books, Walter explored the themes of taking responsibility for your life and that everyone always gets a second chance.

Praise For On a Clear Day…

Kirkus Reviews starred review, August 15, 2014:
“Readers are left to question what actions are possible, what actions are needed and what actions are right in a world where inaction is an impossibility. A clarion call from a beloved, much-missed master.”
or
Not Currently Available for Direct Purchase
Copyright © 2020 American Booksellers Association