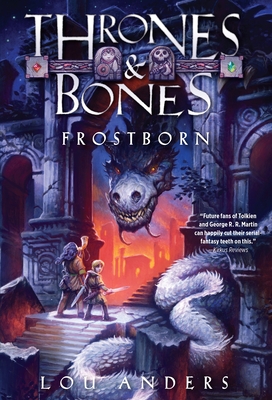 Meet Karn. He is destined to take over the family farm in Norrøngard. His only problem? He’d rather be playing the board game Thrones and Bones.

Enter Thianna. Half human, half frost giantess. She’s too tall to blend in with other humans but too short to be taken seriously as a giant.

When family intrigues force Karn and Thianna to flee into the wilderness, they have to keep their sense of humor and their wits about them. But survival can be challenging when you’re being chased by a 1,500-year-old dragon, Helltoppr the undead warrior and his undead minions, an evil uncle, wyverns, and an assortment of trolls and giants.

Readers will embark on a sweeping epic fantasy as they join Karn and Thianna on a voyage of discovery. Antics and hair-raising escapades abound in this fantasy adventure as the two forge a friendship and journey to unknown territory. Their plan: to save their families from harm.

Debut novelist Lou Anders has created a rich world of over twenty-five countries inhabited by Karn, Thianna, and an array of fantastical creatures, as well as the Thrones and Bones board game.


Praise for Frostborn:
"Future fans of Tolkien and George R.R. Martin can happily cut their serial-fantasy teeth on this first book of an eventual series." -Kirkus Reviews

*"...a powerful, fast-paced tale... The setting is rich, the characters well-defined, and the danger ever-paramount." -Publishers Weekly, starred

"...an excellent choice for readers new to the genre. The themes of staying true to oneself, teamwork, and individuality will resonate with readers." -School Library Journal

"The most delightful fantasy I have read in ages. . . . Put me on the waiting list for book 2!" -Amy Plum, international bestselling author of the Die For Me series

Praise For Frostborn (Thrones and Bones #1)…

"The most delightful fantasy I have read in ages. . . . Put me on the waiting list for book 2!" -Amy Plum, international bestselling author of the Die For Me series

“In this Norse-flavored adventure, Anders, editorial director for Pyr Books and editor of numerous anthologies, pits a clever boy and a resourceful half-giant girl against numerous enemies and the hazards of the frozen wilderness. Twelve-year-old Karn has no desire to learn the family business of farming; he’s much more interested in playing the strategy board game Thrones and Bones. Thianna’s human ancestry makes her an oddity and object of derision among her full-blooded giant peers. Nevertheless, Karn and Thianna become reluctant allies and friends when trouble threatens: Karn runs afoul of a malevolent undead lord, while Thianna must flee from her human mother’s people, who seek a long-lost artifact. Though a lot of elements are in play, Anders ties the novel’s threads together in a neatly satisfying way, crafting a powerful, fast-paced tale. Cleverness is valued as much as martial abilities, swiftness of mind as much as strength of sword arm. The setting is rich, the characters well-defined, and the danger ever-paramount. It’s a strong and thoroughly enjoyable start to the Thrones and Bones series.” - Publishers Weekly, Starred Review


"An obsessive gamer and a sassy half-giant affirm that power lies in being underestimated. As the heir apparent to a powerful farm in Norrøngard (think a fictional Norway), 12-year-old Karn is expected to comprehend bartering techniques (six ewes + six lambs = one cow). His predilection for Thrones and Bones (a traditional Norrønir board game) and disdain for a bucolic existence don’t invite any confidence from his father. Thianna is a 12-year-old half-giant and half-human (by way of her deceased mother). At 7 feet tall, she’s considered diminutive by giant standards and would “cut her human half out in an instant if she could.” When their fathers meet for several days of trading goods, Thianna and Karn strike up an unexpected friendship. Their need for an alliance is accelerated when nemeses from Thianna’s mother’s past surface, and Karn’s life is designated an obstacle by his Machiavellian uncle. Enter: wyverns, a seemingly silent horn, undead assailants, flatulent trolls and one massive dragon. A merging of comedy, action and suspense maintains a promising pace. As present as the lurking danger are two important messages: Focus your energy toward accentuating your strengths rather than regretting weaknesses, and always stand downwind from a troll. Future fans of Tolkien and George R.R. Martin can happily cut their serial-fantasy teeth on this first book of an eventual series. (map, illustrated guide to the Thrones and Bones game) (Fantasy. 10-14)" -Kirkus Reviews

Lou Anders’s research on Norse mythology while writing Frostborn turned into a love affair with Viking culture and a first visit to Norway. He hopes the series will appeal to boys and girls equally. Anders is the recipient of a Hugo Award for editing and a Chesley Award for art direction. He has published over 500 articles and stories on science fiction and fantasy television and literature. A prolific speaker, Anders regularly attends writing conventions around the country. He and his family reside in Birmingham, Alabama. You can visit Anders online at louanders.com and ThronesandBones.com, on Facebook, and on Twitter at @ThronesandBones.