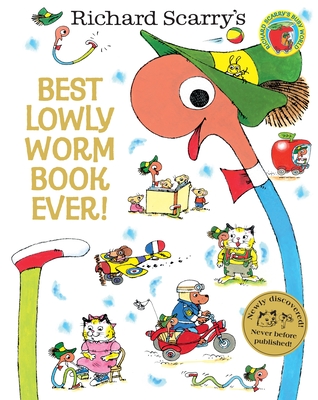 A previously-unpublished classic-in-the-making from Richard Scarry is cause for joyous celebration!

It’s quite the busy day for Lowly Worm. Whether he is at school, on the farm, helping his friends, or zooming about in his apple car, Lowly always gives young readers plenty to see and discover. Learning new words, counting along, and finding their favorite characters in the illustrations, children will repeatedly pore over this newly discovered Richard Scarry gem, lovingly completed by his son, Huck Scarry.

RICHARD SCARRY is one of the world's best-loved children's authors EVER! In his extraordinary career, Scarry illustrated over 150 books, many of which have never been out of print. His books have sold over 100 million copies around the world, and are currently published in over twenty languages. No other illustrator has shown such a lively interest in the words and concepts of early childhood. Richard Scarry was posthumously awarded a Lifetime Achievement Award from the Society of Illustrators in 2012.