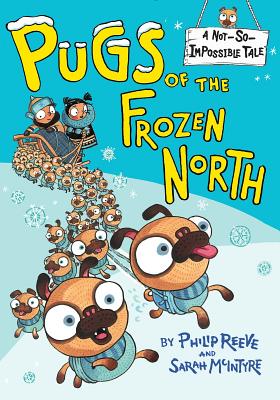 Pugs of the Frozen North (A Not-So-Impossible Tale)

With a little luck and a pack of pugs, anything is paws-ible!

When True Winter comes, it’s time for the Great Northern Race! The best sled teams in the world must reach a mysterious man called the Snowfather. He will grant one wish to the winners. Young racers Sika and Shen want to win more than anything. But they don’t have big sled dogs—all they have is sixty-six yappy, yippy puppy pugs. Can this unlikely team make their dreams come true?

For early chapter book readers who are ready for something longer, the Not-So-Impossible Tales are packed with humor, action, and color illustrations on almost every page.

"A madcap, magical blend of fluff and other good stuff."—Kirkus Reviews, starred review

“With an offbeat approach and beautiful, evocative language, this unusual, fablelike novel will appeal to literary-minded teens.” —Booklist starred review

PHILIP REEVE is the acclaimed author of the Mortal Engines/Predator Cities series, the Fever Crumb series, and the Carnegie Medal–winning Here Lies Arthur. He was born and raised in the seaside town of Brighton and has been writing down adventures since he was five years old. You can learn more about Philip Reeve at philip-reeve.com and follow him on Twitter at @philipreeve1.

SARAH McINTYRE has written and illustrated several picture books and comics for children. Sarah’s delightfully over-the-top drawings and mischievous monkey illustrations brought her and Philip together for this series. You can learn more about Sarah McIntyre at jabberworks.co.uk and follow her at @jabberworks.
or
Not Currently Available for Direct Purchase