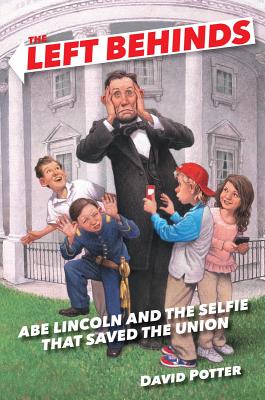 Abe Lincoln and the Selfie that Saved the Union

Percy Jackson fans will embrace this humorous time-travel adventure that sends Mel and his friends right into the Civil War’s Battle of Gettysburg.

Mel, Bev, and Brandon—the Left Behinds—are at it again. When the iTime app on their phones sends them to Washington, D.C., in 1863, they find themselves smack dab in the middle of the Civil War. They sit in on a séance with First Lady Mary Todd Lincoln and are shown every inch of the White House by Tad, the youngest Lincoln. But when they meet President Abe Lincoln himself, he is preoccupied with the fateful battle at Gettysburg, which is just under way.

The kids receive their marching orders—they must somehow travel to Gettysburg, make sure what’s supposed to happen does happen, save the Union, and be home in time for dinner. No biggie. After all, it’s only the entire future of the country at stake.

Includes an author’s note and information on Civil War reenactments and living history sites around the nation.

Praise for the Left Behinds series:
“The narrative is pure fun. . . . History made silly for readers who can’t get into it straight.” —Kirkus Reviews

“This is Magic Tree House all grown up, and kids who once loved that time travel conceit will be delighted all over again.” —The Bulletin of the Center for Children’s Books

“Readers will charge through these super-short chapters like a Revolutionary soldier on the run.” —BookPage

David Potter developed a love for American history as a boy growing up near Morristown, New Jersey, where George Washington spent the winters of 1777 and 1779. He became interested in the Civil War after attending reenactments, memorials, and celebrations at the Gettysburg National Military Park during the 150th anniversary in 2013. You can visit David online at davidpotterbooks.com, on Facebook, and on Twitter at @DPotterBooks.
Loading...
or
Not Currently Available for Direct Purchase