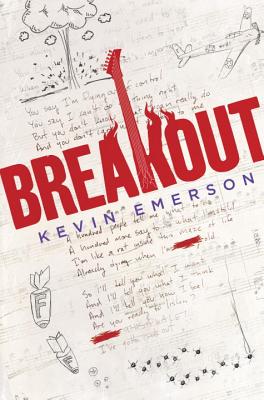 When Anthony's angst-ridden rock 'n' roll lyrics go viral, he's unwittingly cast as the school rebel. The truth is, he's not trying to be anyone's hero.

Anthony Castillo needs a new life.  His teachers are clueless autocrats except for Mr. Darren, who’s in charge of the rock band program. The girls at school are either shallow cutebots or out of his league. And his parents mean well, but they just make things worse. It’s as if Anthony is stuck on the bottom level of his favorite video game, Liberation Force 4.5. Except there is no secret escape tunnel and definitely no cheat code.

Fed up, pissed off, and feeling trapped, Anthony writes his first song for his rock band, the Rusty Soles. His only problem: Arts Night. If he exercises his right to free speech and sings his original lyrics—where his own bombs will drop—he and his band will be through.

The clock is ticking. Time for Anthony to pick his battles and decide what’s really worth fighting for.

Praise for BREAKOUT
“Emerson captures the heady mixture of pride, vulnerability, amazement, and fear Anthony feels in having created something of personal significance that, once public, takes on a life of its own.” –Publishers Weekly

“A solid coming-of-age tale that younger readers will pick up for its emotion and shades of rock and roll.” –School Library Journal

“Anthony’s narrative voice is the very real cri de coeur of every middle-school boy who feels as though his real talents are being underserved by the school curriculum.” –The Bulletin of the Center for Children’s Books

Kevin Emerson is the author of the Exile and the Atlantean series and has led writing workshops in middle schools and high schools. Like Anthony, Kevin lives in Seattle and loves to rock. He has played in bands ever since middle school and has toured the US, Europe, and the UK. You can find Kevin online at kevinemerson.net, on Facebook, and on Twitter at @kcemerson.
Loading...
or
Not Currently Available for Direct Purchase