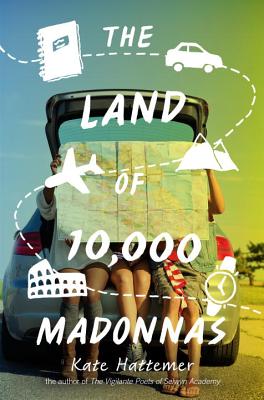 Five teens backpack through Europe to fulfill the mysterious dying wish of their friend in this heartwarming novel from the author of The Vigilante Poets of Selwyn Academy.

Jesse lives with his history professor dad in a house covered with postcards of images of the Madonna from all over the world. They’re gotten used to this life: two motherless dudes living among thousands of Madonnas. But Jesse has a heart condition that will ultimately cut his life tragically short. Before he dies, he arranges a mysterious trip to Europe for his three cousins, his best friend, and his girlfriend to take after he passes away. It’s a trip that will forever change the lives of these young teens and one that will help them come to terms with Jesse’s death.

With vivid writing, poignant themes, and abundant doses of humor throughout, Kate Hattemer’s second novel is a satisfying journey about looking for someone else’s answers only to find yourself.

“Hattemer’s vivid third-person narrative and occasional excerpts from Jesse’s journal create a layered story of big questions and intense relationships . . . making for a moving read for readers of all ages.” —Publishers Weekly

Kate Hattemer graduated with a degree from Yale in Classics. She works as a bookseller in Cincinnati and is the author of The Vigilante Poets of Selwyn Academy, which has received five starred reviews.
Loading...
or
Not Currently Available for Direct Purchase