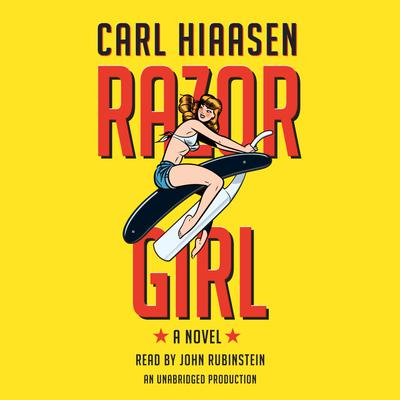 When Lane Coolman's car is bashed from behind on the road to the Florida Keys, what appears to be an ordinary accident is anything but (this is Hiaasen!). Behind the wheel of the other car is Merry Mansfield--the eponymous Razor Girl--and the crash scam is only the beginning of events that spiral crazily out of control while unleashing some of the wildest characters Hiaasen has ever set loose on the page. There's Trebeaux, the owner of Sedimental Journeys--a company that steals sand from one beach to restore erosion on another . . . Dominick "Big Noogie" Aeola, a NYC mafia capo with a taste for tropic-wear . . . Buck Nance, a Wisconsin accordionist who has rebranded himself as the star of a redneck reality show called Bayou Brethren . . . a street psycho known as Blister who's more Buck Nance than Buck could ever be . . . Brock Richardson, a Miami product-liability lawyer who's getting dangerously--and deformingly--hooked on the very E.D. product he's litigating against . . . and Andrew Yancy--formerly Detective Yancy, busted down to the Key West roach patrol after accosting his then-lover's husband with a Dust Buster. Yancy believes that if he can singlehandedly solve a high-profile murder, he'll get his detective badge back. That the Razor Girl may be the key to Yancy's future will be as surprising as anything else he encounters along the way--including the giant Gambian rats that are livening up his restaurant inspections.
Loading...