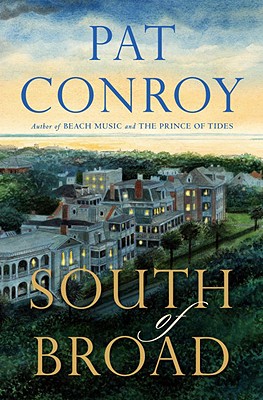 “After far too long an absence, Pat Conroy has returned with an epic tale of friendship that survives school integration, the AIDS epidemic, Hurricane Hugo, and horrific family pasts and secrets. You'll fall in love with Charleston, South Carolina, through the words and life of Leo King as he resolves to right his own life while reaching across racial and class lines to create lifelong bonds with an unlikely band of high school seniors.”
— Nancy Drott, Blue Willow Bookshop, Houston, TX
View the List

Leopold Bloom King has been raised in a family shattered—and shadowed—by tragedy. Lonely and adrift, he searches for something to sustain him and finds it among a tightly knit group of outsiders. Surviving marriages happy and troubled, unrequited loves and unspoken longings, hard-won successes and devastating breakdowns, as well as Charleston, South Carolina’s dark legacy of racism and class divisions, these friends will endure until a final test forces them to face something none of them are prepared for.

Spanning two turbulent decades, South of Broad is Pat Conroy at his finest: a masterpiece from a great American writer whose passion for life and language knows no bounds.

“Richly imagined . . . These characters are gallant in the grand old-fashioned sense, devoted to one another and to home. That siren song of place has never sounded so sweet.”—New Orleans Times-Picayune

“A pleasure to read . . . a must for Conroy’s fans.”—Associated Press

Praise For South of Broad…

"Conroy is an immensely gifted stylist…. No one can describe a tide or a sunset with his lyricism and exactitude."—Chris Bohjalian, The Washington Post

"Conroy writes with a momentum that's impossible to resist."—People, 3 of 4 stars.

"Beautifully written throughout…. Conroy is a natural at weaving great skeins of narrative, and this one will prove a great pleasure to his many fans."—Kirkus Reviews (starred review)

"Conroy is a master of American fiction and he has proved it once again in this magnificent love letter to his beloved Charleston, and to friendships that will stand the test of time."—Bookpage

"Astonishing . . . stunning . . . the range of passions and subjects that brings life to every page is almost endless." —Washington Post Book World

"Lyrical . . . evocative . . . Beach Music is one from the heart, and it beats with a vibrancy that cannot be denied." —Hartford Courant

"Breathtaking . . . perhaps the most eagerly awaited book of the year . . . a knockout." —Charlotte Observer

"Few novelists write as well, and none as beautifully . . . Conroy's narrative is so fluid and poetic that it's apt to seduce you into reading just one more page, just one more chapter." —Lexington Herald-Leader

At the beginning of the novel, Leo is called on to mitigate the racial prejudice of the football team. What other types of prejudice appear in the novel? Which characters are guilty of relying on preconceived notions? Why do you think Leo is so accepting of most people? Why is his mother so condemnatory?

What do you think of the title South of Broad? How does the setting inform the novel? Would the novel be very different if it were set in another city or region?

As a teenager, Leo is heavily penalized for refusing to name the boy who placed drugs in his pocket. Why did he feel compelled to protect the boy’s identity? Do you think he did the right thing?

When Leo’s mother asks him to meet his new peers, she warns, “Help them, but do not make friends with them.” Do you think such a thing possible? Through the novel, how does Leo help his friends, and how do they help him?

Leo’s mother tells him, “We’re afraid the orphans and the Poe kids will use you,” to which he responds, “I don’t mind being needed. I don’t even mind being used.” Do you think this is a healthy attitude toward friendship? Do any of the characters end up “using” Leo? Does his outlook on friendship changed by the end of the novel?

Leo admits that the years after Steven’s suicide nearly killed him. How was he able to cope? How do Leo’s parents deal with their grief? What does the novel say about human resilience and our propensity to overcome tragedy?

When Sheba suggests to Leo that he divorce his wife, he says, “I knew there were problems when I married Starla so I didn’t walk into that marriage blind.” Do you think that knowledge obligates Leo to stay with his wife? In your opinion, does Leo do the right thing by staying married? Would you do the same?

Both Chad and Leo are unfaithful to their wives, but only Leo is truthful about it. Do you think this makes Chad’s infidelity a worse offense? Why or why not?

At two points in the novel, the group tries to rescue a friend: first Niles, then Trevor. But when Starla is in trouble, they don’t attempt to save her. Why do you think this is? Has Starla become a “lost cause”?

At one point Leo remarks, “I had trouble with the whole concept [of love] because I never fully learned the art of loving myself.” How does the concept of self-love play into the novel?

In the moment before Leo attacks Trevor’s captor, he recites a portion of “Horatio at the Bridge,” a poem about taking a lone stand against fearful odds. What is the significance of the verse? Do you think it’s appropriate to that moment?

The twins are the novel’s most abused characters and also the most creative. Do you think there is a connection between suffering and art?

What do you make of the smiley face symbol that Sheba and Trevor’s father paints? How does the novel address the idea of happiness coexisting with pain?

At several points in the novel, characters divulge family secrets. Do you believe that this information should stay secret, or is there value in bringing it to light?

Leo examines his Catholicism at several points in the novel. What do you think he might say are the advantages and drawbacks of his religion? Do you think all religions are fraught with those problems?

One might interpret Leo’s mother’s attitude toward religion as one of blind faith. If Steven had admitted his abuse to her, do you think she would she have believed him? How do you think the information might have affected her?

Sheba and Trevor are literally tormented by their childhoods, in the form of their deranged father. How are some of the other characters hindered by the past? Are they ever able to escape its clutches and, if so, by what means?

Discuss the scene in which Leo and Molly rescue the porpoise. What does the event symbolize?

Why do you think the discoveries about Leo’s mother and Monsignor Max begin and end the novel? What theme do these incidents convey?

Chapter one begins with the statement, “Nothing happens by accident,” and Leo often reflects on the way that destiny has shaped his life. How does destiny affect the other characters? Do you agree that real life is the result of predetermined forces? Or can we affect our fate?