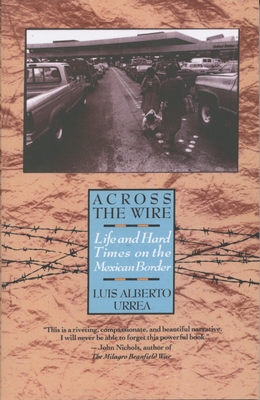 Life and Hard Times on the Mexican Border

Luis Alberto Urrea's Across the Wire offers a compelling and unprecedented look at what life is like for those refugees living on the Mexican side of the border—a world that is only some twenty miles from San Diego, but that few have seen.  Urrea gives us a compassionate and candid account of his work as a member and "official translator" of a crew of relief workers that provided aid to the many refugees hidden just behind the flashy tourist spots of Tijuana.  His account of the struggle of these people to survive amid abject poverty, unsanitary living conditions, and the legal and political chaos that reign in the Mexican borderlands explains without a doubt the reason so many are forced to make the dangerous and illegal journey "across the wire" into the United States.
More than just an expose, Across the Wire is a tribute to the tenacity of a people who have learned to survive against the most impossible odds, and returns to these forgotten people their pride and their identity.


Praise For Across the Wire: Life and Hard Times on the Mexican Border…

"This is a riveting, compassionate, and beautiful narrative.  I will never be able to forget this powerful book." -John Nichols, author of The Milagro Beanfield War

"The Borderland—the trouble zone between two countries, between two languages, the poverty which is the huge shadow of affluence, the place where you live when life is impossible, the time between boyhood and manhood when a young man does crazy things, the region where the saints and the outlaws are— all these borderlands are in Urrea's book of horrors and marvels, tenderness and rage."- Ursula K. Le Guin, author of The Left Hand of Darkness

Luis Alberto Urrea was born in Tijuana to an American mother and a Mexican father.  He graduated from the University of California, San Diego, in 1977.  After working as a film extra, he joined a crew of relief workers helping the poor on the Mexican side of the border.  In 1982, he went to Massachusetts, where he taught Expository Writing at Harvard.  Currently, he lives in Boulder, Colorado.
Loading...
or
Not Currently Available for Direct Purchase