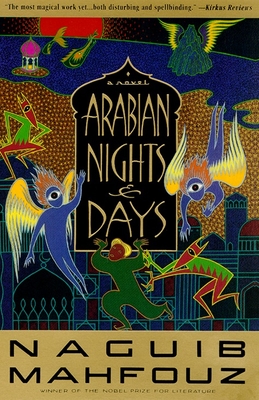 The Nobel Prize-winning Egyptian writer Naguib Mahfouz refashions the classic tales of Scheherazade into a novel written in his own imaginative, spellbinding style. Here are genies and flying carpets, Aladdin and Sinbad, Ali Baba, and many other familiar stories from the tradition of The One Thousand and One Nights, made new by the magical pen of the acknowledged dean of Arabic letters, who plumbs their depths for timeless truths.

Praise For Arabian Nights and Days: A Novel…

"An enthralling novel. . . . Mahfouz has plunged into the ancient book of fantasy and found a modern truth." --Chicago Tribune

"Its colorful portrayal of human conflict and folly . . . generously displays the narrative skills that make Mahfouz one of the best of all modern storytellers. Few writers display such masterly comprehension of the interconnectedness of character and fate. This novel soars." --Philadelphia Inquirer

"Arabian Nights and Days is among Mr. Mahfouz's best works. . . . An eloquent ratification of his Nobel Prize." --Dallas Morning News

Naguib Mahfouz was born in Cairo in 1911 and began writing when he was seventeen. His nearly forty novels and hundreds of short stories range from re-imaginings of ancient myths to subtle commentaries on contemporary Egyptian politics and culture. Of his many works, most famous is The Cairo Trilogy, consisting of Palace Walk (1956), Palace of Desire (1957), and Sugar Street (1957), which focuses on a Cairo family through three generations, from 1917 until 1952. In 1988, he was the first writer in Arabic to be awarded the Nobel Prize in Literature. He died in August 2006.