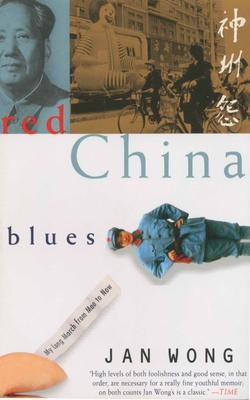 My Long March From Mao to Now

Jan Wong, a Canadian of Chinese descent, went to China as a starry-eyed Maoist in 1972 at the height of the Cultural Revolution. A true believer--and one of only two Westerners permitted to enroll at Beijing University--her education included wielding a pneumatic drill at the Number One Machine Tool Factory. In the name of the Revolution, she renounced rock & roll, hauled pig manure in the paddy fields, and turned in a fellow student who sought her help in getting to the United States. She also met and married the only American draft dodger from the Vietnam War to seek asylum in China.

Red China Blues is Wong's startling--and ironic--memoir of her rocky six-year romance with Maoism (which crumbled as she became aware of the harsh realities of Chinese communism); her dramatic firsthand account of the devastating Tiananmen Square uprising; and her engaging portrait of the individuals and events she covered as a correspondent in China during the tumultuous era of capitalist reform under Deng Xiaoping. In a frank, captivating, deeply personal narrative she relates the horrors that led to her disillusionment with the "worker's paradise." And through the stories of the people--an unhappy young woman who was sold into marriage, China's most famous dissident, a doctor who lengthens penises--Wong reveals long-hidden dimensions of the world's most populous nation.

In setting out to show readers in the Western world what life is like in China, and why we should care, she reacquaints herself with the old friends--and enemies of her radical past, and comes to terms with the legacy of her ancestral homeland.

Praise For Red China Blues: My Long March From Mao to Now…

"A marvellous book by one of Canada’s best-ever foreign correspondents at the top of her form." - The Gazette (Montreal)

"Totally captivating. A wonderful memoir." - The Globe and Mail

"A lovely read. One can only hope this book is the first of many." - The Financial Post

"A must-read for all China watchers." - The Edmonton Journal

Jan Wong was the Beijing correspondent for the Toronto Globe and Mail from 1988 to 1994. She is a graduate of McGill University and the Columbia University Graduate School of Journalism, and is the recipient of the George Polk Award, and other honors for her reporting. Wong has written for The New York Times and The Wall Street Journal, among many other publications in the United States and abroad. She lives in Toronto.
Loading...
or support indie stores by buying on