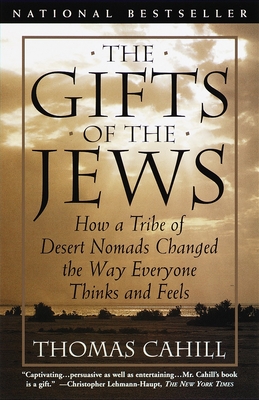 The Gifts of the Jews (Paperback)

The author of the runaway bestseller How the Irish Saved Civilization has done it again. In The Gifts of the Jews Thomas Cahill takes us on another enchanting journey into history, once again recreating a time when the actions of a small band of people had repercussions that are still felt today.

The Gifts of the Jews reveals the critical change that made western civilization possible. Within the matrix of ancient religions and philosophies, life was seen as part of an endless cycle of birth and death; time was like a wheel, spinning ceaselessly. Yet somehow, the ancient Jews began to see time differently. For them, time had a beginning and an end; it was a narrative, whose triumphant conclusion would come in the future. From this insight came a new conception of men and women as individuals with unique destinies--a conception that would inform the Declaration of Independence--and our hopeful belief in progress and the sense that tomorrow can be better than today. As Thomas Cahill narrates this momentous shift, he also explains the real significance of such Biblical figures as Abraham and Sarah, Moses and the Pharaoh, Joshua, Isaiah, and Jeremiah.

Full of compelling stories, insights and humor, The Gifts of the Jews is an irresistible exploration of history as fascinating and fun as How the Irish Saved Civilization.

THOMAS CAHILL is the author of the best-selling books, How the Irish Saved Civilization: The Untold Story of Ireland’s Heroic Role from the Fall of Rome to the Rise of Medieval Europe, The Gifts of the Jews: How a Tribe of Desert Nomads Changed the Way Everyone Thinks and Feels, Desire of the Everlasting Hills: The World Before and After Jesus, Sailing the Wine-Dark Sea: Why the Greeks Matter, Mysteries of the Middle Ages: And the Beginning of the Modern World, and, most recently, Heretics and Heroes: How Renaissance Artists and Reformation Priests Created Our World. These six books comprise Volumes I, II, III, IV, V, and VI, respectively, of the Hinges of History, a prospective seven-volume series in which the author recounts formative moments in Western civilization. In "The Hinges of History," Thomas Cahill endeavors to retell the story of the Western World through little-known stories of the great gift-givers, people who contributed immensely to Western, culture and the evolution of Western sensibility, thus revealing how we have become the people we are and why we think and feel the way we do today.

Thomas Cahill is best known, in his books and lectures, for taking on a broad scope of complex history and distilling it into accessible, instructive, and entertaining narrative. His lively, engaging writing animates cultures that existed up to five millennia ago, revealing the lives of his principal characters with refreshing insight and joy. He writes history, not in its usual terms of war and catastrophe, but as "narratives of grace, the recountings of those blessed and inexplicable moments when someone did something for someone else, saved a life, bestowed a gift, gave something beyond what was required by circumstance." Unlike all too many history lessons, a Thomas Cahill history book or speech is impossible to forget.

He has taught at Queens College, Fordham University and Seton Hall University, served as the North American education correspondent for the Times of London, and was for many years a regular contributor to the Los Angeles Times Book Review. Prior to retiring recently to write full-time, he was director of religious publishing at Doubleday for six years. He and his wife, Susan, also an author, founded the now legendary Cahill & Company, whose reader’s catalogue was much beloved in literary households throughout the country. They divide their time between New York, Rome and Paris.

Praise For The Gifts of the Jews: How a Tribe of Desert Nomads Changed the Way Everyone Thinks and Feels (The Hinges of History)…

"Persuasive as well as entertaining...Mr. Cahill's book [is] a gift."--Christopher Lehmann-Haupt, The New York Times

"This is a valuable book, of interest to everyone, religious or not."
--Washington Times