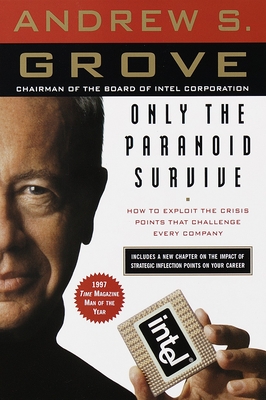 Only the Paranoid Survive

How to Exploit the Crisis Points That Challenge Every Company

Andy Grove, founder and former CEO of Intel shares his strategy for success as he takes the reader deep inside the workings of a major company in Only the Paranoid Survive.

Under Andy Grove's leadership, Intel became the world's largest chip maker and one of the most admired companies in the world. In Only the Paranoid Survive, Grove reveals his strategy for measuring the nightmare moment every leader dreads--when massive change occurs and a company must, virtually overnight, adapt or fall by the wayside--in a new way.

Grove underscores his message by examining his own record of success and failure, including how he navigated the events of the Pentium flaw, which threatened Intel's reputation in 1994, and how he has dealt with the explosions in growth of the Internet. The work of a lifetime, Only the Paranoid Survive is a classic of managerial and leadership skills.

Praise For Only the Paranoid Survive: How to Exploit the Crisis Points That Challenge Every Company…

"Probably the best book on business written by a business person since
Alfred Sloan's My Years with General Motors."
--Forbes

"This book is about one super-important concept. You must learn about Strategic Inflection Points, because sooner or later you are going to live through one."
--Steve Jobs, CEO, Pixar Animation Studios

"Andy explains--with modesty that cannot conceal his brilliance, how he has led Intel through changes and challenges that many companies could not cope with...The country will benefit from his vision."
--Reed Hundt, Chairman, Federal Communications Commission

Andrew S. Grove emigrated to the United States from Hungary in 1956. He participated in the founding of Intel, and became its president in 1979 and chief executive officer in 1987. He was chosen as Time magazine's Man of the Year in 1997. In 1998, he stepped down as CEO of Intel, but continued as chairman of the board. Grove taught at the Stanford University Graduate School of Business. He lived in the San Francisco Bay Area until his death.
Loading...
or support indie stores by buying on