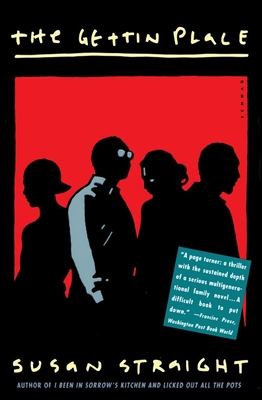 Susan Straight's most powerful novel yet is framed by two race riots: the little known Tulsa riots of the 1920s, in which white Tulsa burned down the town's black enclave; and the notorious L. A. riots of the 1990s.

Straight's brilliant story of the effects of violence in America on three generations of a family is told through the lives of the Thompsons, a large clan who live in Treetown, above downtown Rio Seco, California, and operate a car towing and repair business. Patriarch Hosea is a proud man, and a hardened one, whose father was killed in the violence that erupted in Tulsa many years earlier. All Hosea's memories come flooding black with ferocious force when the bodies of two white women are found engulfed in flames in an abandoned car on his property. These are the first signs that someone wants Hosea off his land; it is up to his son Marcus, the only one of the six children of Hosea and his half-Mexican wife who can negotiate with the white world, to help the family hold on to their home and their livelihood.

But it is only when Marcus' nephew Motrice-a young man infatuated with guns and the power that they bring- comes back to Rio Seco from gang-ridden Los Angeles that the real secrets of the bodies found on Thompson land are revealed, as Rio Seco erupts in the same wave of trashing and looting that has engulfed the nearby metropolis.

The Gettin Place is a powerful portrait of a family struggling to defend its turf in a changing world, to hold on to the gettin place, the source from which they derive the tools for survival.

Susan Straight is the author of six novels, including A Million Nightingales and the National Book Award finalist Highwire Moon. She has written for The New York Times Magazine, the Los Angeles Times, Harper’s Magazine, and NPR’s All Things Considered. Her short stories have won an Edgar Award and an O. Henry Award. She teaches at the University of California, Riverside.
Loading...
or support indie stores by buying on