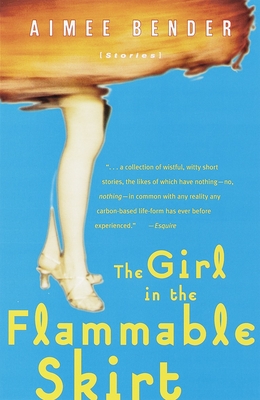 The Girl in the Flammable Skirt

A grief-stricken librarian decides to have sex with every man who enters her library. A half-mad, unbearably beautiful heiress follows a strange man home, seeking total sexual abandon: He only wants to watch game shows. A woman falls in love with a hunchback; when his deformity turns out to be a prosthesis, she leaves him. A wife whose husband has just returned from the war struggles with the heartrending question: Can she still love a man who has no lips?

Aimee Bender's stories portray a world twisted on its axis, a place of unconvention that resembles nothing so much as real life, in all its grotesque, beautiful glory. From the first line of each tale she lets us know she is telling a story, but the moral is never quite what we expect. Bender's prose is glorious: musical and colloquial, inimitable and heartrending.

A 1998 New York Times Notable Book of the Year. Selected by the Los Angeles Times as one of the best works of fiction of 1998.

Praise For The Girl in the Flammable Skirt: Stories…

"Aimee Bender's debut is a string of jewels."
--Publishers Weekly

"Aimee Bender's stories come as a revelation....She's a thrilling discovery."
--Jonathan Lethem, author of  Girl in Landscape  and As She Climbed Across the Table

"Keep your eye on this writer and her highwire act. I have a feeling she'll be keeping readers breathless for a long time to come."
--Dani Shapiro, author of  Slow Motion

Aimee Bender is the author of the novels The Particular Sadness of Lemon Cake—a New York Times bestseller—and An Invisible Sign of My Own, and of the collections The Girl in the Flammable Skirt and Willful Creatures. Her works have been widely anthologized and have been translated into sixteen languages. She lives in Los Angeles.
Loading...
or support indie stores by buying on
(This book is on backorder)