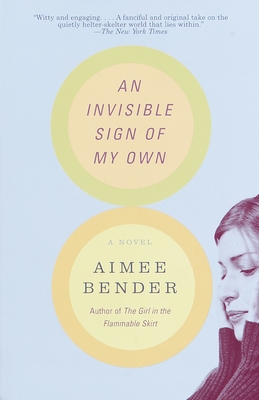 Aimee Bender’s stunning debut collection, The Girl in the Flammable Skirt, proved her to be one of the freshest voices in American fiction. Now, in her first novel, she builds on that early promise.

Mona Gray was ten when her father contracted a mysterious illness and she became a quitter, abandoning each of her talents just as pleasure became intense. The only thing she can’t stop doing is math: She knocks on wood, adds her steps, and multiplies people in the park against one another. When Mona begins teaching math to second-graders, she finds a ready audience. But the difficult and wonderful facts of life keep intruding. She finds herself drawn to the new science teacher, who has an unnerving way of seeing through her intricately built façade. Bender brilliantly directs her characters, giving them unexpected emotional depth and setting them in a calamitous world, both fancifully surreal and startlingly familiar.

Praise For An Invisible Sign of My Own: A Novel…

“Intelligent and engaging… [A] fanciful and original take on the quietly helter-skelter world that lies within.”–The New York Times

“Light as a zephyr and unique as a snowflake.”– The Washington Post

Aimee Bender is the author of the novels The Particular Sadness of Lemon Cake—a New York Times bestseller—and An Invisible Sign of My Own, and of the collections The Girl in the Flammable Skirt and Willful Creatures. Her works have been widely anthologized and have been translated into sixteen languages. She lives in Los Angeles.
Loading...
or
Not Currently Available for Direct Purchase